The "sequel" to Wii Fit, with 21 extra minigames, including segways, chicken costumes, doing math by bumping your butt against mushrooms, Rhythm Kung-Fu, and more crazy antics! All of the Wii Fit unused content is here as well.

Stage\RPHealthBicycle\TestField.arc has a testing stage for the bicycle minigame, probably testing things such as ramps, surfaces, and distances. 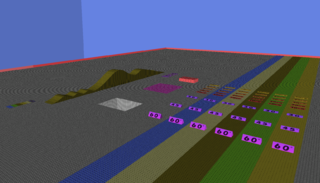 It has several textures representing different materials with kanji on it.

A picture with "Mii" written on it.

Present in InstallInfo/HealthNand#$.txt where according to the internal developer wiki, these are files titled the way symbol maps are. # is the destination (game region) and $ is Target (build target), i.e. "UP" is US Product, interestingly it mentions most likely the internal name of the game's channel.

timeStamp.txt has the build date of the game.

Oddly not stubbed out in product builds of the game is a hidden display for the product build date. According to the developer documents in an internal developer wiki found in the 2020-09-09 Nintendo leaks, pressing a button combo going by "A, Up (D-Pad), 2, Down (D-Pad), B, 1, 1, B, Left (D-Pad), A and Right (D-Pad)" on a Wii Remote at the square (title screen) will show a display in the bottom right corner in red for the region and product build type (found in the executable) and also print out the data in timeStamp.txt until the scene is exited, there is no sound cue.