WinBack: Covert Operations is a third-person shooter video game that borrows many elements from Metal Gear Solid. This game would later be ported over to the PlayStation 2 with updated graphics and added voice acting during cutscenes.

Two hidden cheats in this game, never found before can be activated by the following button inputs. In order to input them, you must be at the PRESS START screen which is the screen before the main menu. After pressing the right button inputs, you will hear a sound confirming that the cheat is now active. You can also activate them with the following GameShark codes if you want to take the lazy route.

Gives big heads to all characters in the game, including AI:

Recovers all health when pressing the L button in-game:

It might take several attempts to active this cheat using button inputs as it's quite a complex set of inputs. The PlayStation 2 version of this game is more lenient on the time given at the PRESS START screen, so it's harder to input on this version of the game.

A shot of Big Head Mode: 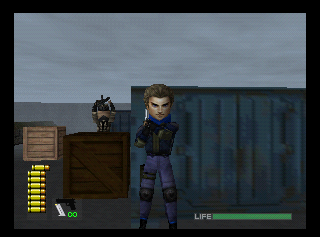 An unused M16 for Jean-Luc can be accessed with the following GameShark code. Oddly enough, the gun is always loaded in single player. The game has certain types of models only loaded for certain areas, including enemies and props. This gun however, is always loaded.

This changes Jean-Luc's current weapon to the M16. 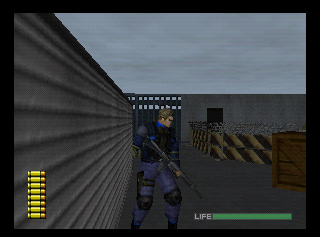 The map contains no textures, a invisible ramp on both sides of the map, no weapon pick-ups, and invisible fences on-top of the walk ways. The unused map can be accessed with the following GameShark code. Simply enter a multiplayer level with the code enabled to access this level. 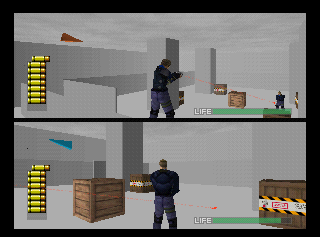 At one point in the game, it looked like you could jump between cover and possibly dodge as well.

Activate by replacing the ????'s with one of the values below and pressing C-Down to see the animation:

At one point in the game's early stages, models of the S.C.A.T team had different colors and very shotty or blocky unfinished models. These models are all playable in VS mode and act like their finished counterpart. The early skins of the S.C.A.T team are included (Jean Luc, Dan, Steve, Lisa, Mike, and Matt as well as the engineer).

For some reason, the Engineer was given the most changes, as he can be seen to have as many as three changed outfits. He was going to be a common ally, but instead only appeared in cut scenes and VS mode. The models can also appear to have some torn textures compared to the previous models.