Wing Commander is the SNES version of Origin's highly acclaimed space flight sim from 1990. It remained mostly faithful to the original, but with somewhat simplified flight and combat mechanics and a slight decrease in graphics quality. The first Secret Missions expansion was also ported as a standalone game. 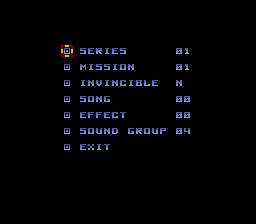 Series selects a sector and Mission selects an individual mission within that sector. Invincible makes you impervious to damage, though your wingman can still be killed and it is still possible to lose the game through other means, such as losing the Tiger's Claw (or destroying it yourself.)

Song and Effect play various sounds and music, and Sound Group selects one of four music banks. Songs 00 through 03 are the same in each bank.

Text for a possible object/animation viewer begins at offset 0x017B12 in an unheadered US ROM. There are no apparent references to this text left in the code.

This short jingle appears at the end of sound bank 4. The only other music exclusive to this bank is the title screen music. It is possible that this was used to test the SNES version's music routine, as it is not present in the original PC version.

The Japanese version of the game replaces the font on the ship's HUD and the map screen with a different one containing larger (but kind of awkward-looking) lowercase letters, and a few altered uppercase letters.