Wings of Wor, developed by the same team that made Cho Aniki, but without all the homoerotic imagery. 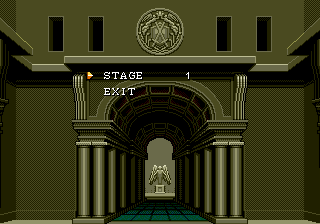 In the Options menu, highlight 'Control' and hold A until the Level Select appears.

Hold Left + C on Controller 2 and reset the console. While still holding all the buttons, wait on the title screen until game resets back to the SEGA logo. Instead, the game will load the 1st loop ending sequence.

Present at 0x200. This is also found in Target Earth.

The Japanese version contains a different set of congratulatory messages after finishing the game on different difficulties and loops. The credits also have some differences.