Not to be confused with FreeCell II: The King of Diamonds.

Like all MacPaint documents, the one containing the title screen has an unchangeable resolution of 576 by 720 pixels. Much of the leftover space in it is taken up by scribbling, with the annotation "This ensures no read error on Load..." 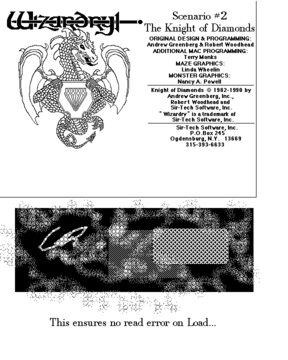 Despite that warning, erasing the unused portions of the image (including the one-pixel border) had no visible effect when the game's about screen was viewed from a floppy disk.