Far from a simple port, the Mac Wolfenstein 3D added new features, altered level designs, and high-res graphics. This port is a slightly altered version of the Jaguar version, which originated from the SNES one. Whew.

The game contains one unused sprite for the Ubermutant. It is listed in the WolfEdit 2 editor, which labels it "Unused". 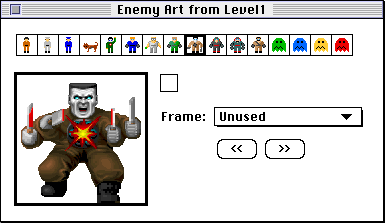 (Note: This is a custom level which the game data from the executable has been added to.)

In Spear of Destiny, the Ubermutant used three firing frames. However, in the Mac Family, he is the same as all other bosses with only two frames.

An unused enemy can be seen in-game by placing an object with a value of 120 (regular) or 138 (ambush) in the map editor.

The enemy has no art or sounds and appears to behave similar to an SS, except it uses the boss firing sound.

The enemy is listed between the Hitler and Pac-Man objects. One possible candidate is the Fake Hitler found in the DOS version, who is completely absent in the Third Encounter. 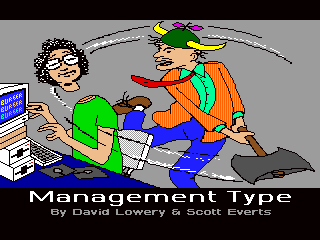 A fairly easily accessible Easter egg: simply press B on the id Software logo. The artwork is a caricature of lead programmer Rebecca "Burger" Heinemann and some friendly management figure (name unknown).

This image also appears in the 3DO port of Out of this World, also coded by Burger.

Turn on Balloon Help and hover over the application icon for this tongue-in-cheek summary: