One of the only two baseball games for the 32X. This game is rather notorious for its absolutely awful crowd sound during gameplay, which basically sounds like someone left a loud kitchen sink on. 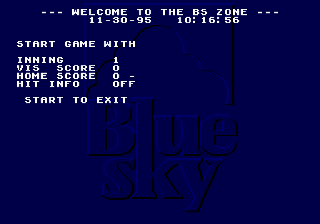 Here, you can toggle the amount of runs each team starts with (from 0 to 9), which inning the game will start in, and whether or not to display the coordinates of a hit ball. A compile date and time is also displayed. 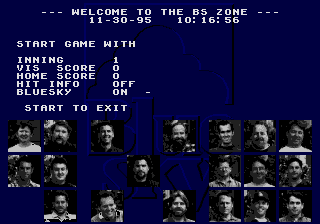 In the debug menu, set Inning to 3, Vis Score to 1, and Home Score to 3. Now press and hold A+B+C+Start. When the screen begins to fade out, release the buttons. If done correctly, the debug menu will reload, with an extra option, "BlueSky" added to it. Toggle this on, and a bunch of developer photos will appear on the bottom of the screen, and a BlueSky Software team will be made available in Exhibition mode.