X-COM: UFO Defense is a turn-based tactical combat game with elements of global strategy, resource management, RPG, and even a bit of arcade. Intercept and shoot down UFOs, capture aliens, protect cities from acts of terror, and study your enemies to fight them better. The game spawned two less successful sequels in the same genre, two more failed sequels in different genres, and more recently a very successful reboot in XCOM: Enemy Unknown.

A lot of info about the game's internals is collected in the fan wiki https://www.ufopaedia.org/index.php/X-COM

There was the original release, several patches up to Version 1.4 (at least for MS-DOS), and a "Collectors' Edition" also labelled as Version 1.4 but with significant changes to the engine and sounds to address compatibility issues.

The PlayStation version features a non-random map for the final mission and several animated cutscenes for the mission end (good and bad) and for the endgame.

This was the first Amiga version, released in 1994 and compatible only with AGA Amigas (i.e. Amiga 1200 and 4000). Coming on 4 floppy disks it was mostly on par feature/gameplay wise with the PC original with identical 256 colour graphics. However, perversely it has things missing even compared to the other Amiga versions:

This was the second Amiga release of the game, also released in 1994, on CD. Intended as a somewhat further enhanced edition of the AGA version but for the CD32 games console. This version comes frustratingly close to being the definitive edition for the Amiga, but has some massive and quite bizarre issues due to the game console's notoriously tiny 1kb NVRAM used for saving games that effectively ruin it.

The final and worst of the Amiga versions. Released in 1995 and designed to run on the then obsolete and far underpowered Amiga OCS chipset (as found in the popular Amiga 500), the game runs with a massively reduced number of colours meaning all graphics are hugely inferior to the PC original, and also the Amiga AGA versions. Oddly, despite being objectively the worst version of the game ever released, it's clearly an iterative effort and has some new features included that were missing from the other two Amiga versions. It also came on five floppy disks unlike the AGA version, with the extra disk used for the cut music and art outlined below. Game differences include: 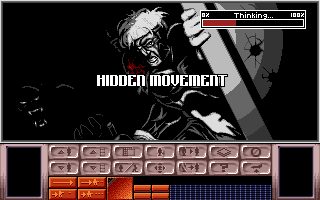 UFOs and alien bases may have a number of immobile objects which are captured when a player wins a tactical mission. Then they can be sold for money or researched to unlock further research, or at least get some flavor text and score. But there are at least three exceptions.

A valid base inventory object and research topic, with Ufopedia text and graphics available, but the Battlescape tile that would yield it after a mission is not implemented. The research text reads:

English: These chambers contain alien foetuses. The design of these containers seems to suggest that the aliens which use this process rely completely on laboratory reproduction. The rich nutrients ensure rapid development of the foetus. This factory line system could generate thousands of alien clones in a short space of time. The process could be easily adapted for human reproduction, or alien-human hybrids.

The item does not trigger any lines of research and is there solely for flavor, just like half a dozen other "alien research" items. There are various fan speculations to as why it was not included. Interestingly, this idea is revisited in X-COM: Apocalypse as "procreation parks" derived from the invaders' technology and being the preferred way of reproduction for humans in the 2080s.

In the sequel X-COM: Terror from the Deep, the "USO Construction" item is captured in downed USOs, and the player needs to study it to be able to research craft based on alien technology... but in this game the UFO Construction item has no relation to UFO Construction research. The research is unlocked by a combination of topics on UFO components. However, the base inventory item still exists and can be sold, if it's added by editing a save game.

Research item, text, and graphics are absent. Battlescape tiles can be altered to yield this base inventory item after a mission and it can be sold, but not researched. Fans speculate that this item together with "Alien Food" may have been intended for researching Alien Containment facility, but in all versions of the game Alien Containment is already buildable from the start.

Aircraft weapons lack description texts in the game, but the strings are present in the ENGLISH.DAT, FRENCH.DAT, and GERMAN.DAT files. The first five obviously correspond to Stingray, Avalanche, Cannon, Fusion Ball and Laser Cannon. The remaining weapon is Plasma Beam, which doesn't fit the remaining description.

Tactical maps are randomly assembled from pre-made blocks. Maps (3D arrays of tile indexes, usually 10×10×3) of each block are stored in MAP files, and tiles they use are defined in MCD, PCK, and TAB files. A map can use multiple tilesets and what corresponds to what is set in the engine.

There are several MAP files that are not used by the engine. There is no way to tell what tile sets they were made for, but fans have figured out reasonably good guesses: https://www.ufopaedia.org/index.php/Talk:MAPS

A 32×48×3 map with several blocky human buildings, but with alien gravity elevators.

The file contains several extra bytes at the start, and has to be manually edited for MAP editing software to accept it. The polar terrain was chosen because only it has puddles; the original intention is unknown. The block is far larger than any other terrain block, and cannot be combined with them as it is because everything else has length and width in multiples of 10. There is no room to place X-COM craft and no exit grid, thus the block cannot be used as the only block for the mission.

A 10×20×4 map with two pyramids linked together, with alien technology inside.

A very simplistic 10×10×1 design similar to the medium scout UFO.

This map uses unused tiles from files UFO1.MCD, UFO1.PCK, and UFO1.TAB - same as for Small Scout. Unlike Small Scout, however, this ship has no gravity lift and no interior.

Fire and smoke area effects use similar mechanics, but the engine allows four more types of smoke-like effects. There are no resource files for them and nobody knows what they were going to be. They are speculated to be gas weapons like in Apocalypse.

There are four unused types of grenades. Again, speculated to carry the four unimplemented types of smoke-like weapon.