The aliens have taken over the world! Politely convince them to jog on.

"I myself will carry you to the gates of Valhalla, Commander... you will ride eternal, shiny and chrome!"

ADVENT MECs have an animation for a melee attack. It's similar to the Andromedons' animation, but not exactly the same.

Chryssalids have an animation of them being punched back far, far away, as if they were hit with the Kinetic Strike module. This is even referenced in the animation's name.

The Andromedon has an animation of it in a T-Pose, with the only thing moving being its air compressor. Probably used for testing.

The ADVENT MEC has an unused model located inside AdvMEC_M2_SF called AdventMEC_RenderPose. It's the model for the MEC, but posed for its rendered image. Obviously it was used for making said rendered image, but why it was left in the game?

Andromedon and Chryssalid both have preposed models though their names don't mention "Render" at all. Andromedon is split into a model for each material on its combined model, Body, Alien, Glass Clear, Glass Green and Weapon. Interestingly, Andromedon's weapon here isn't the same as the weapon it has in the final game, suggesting these renders are from earlier in development.

Chryssalid has two models unlike the MEC and Andromedon; Chryssalid_Attack and Chryssalid_Idle. While the idle pose was used for the final render, the attacking pose was left in probably because it was a choice between which one would be rendered.

Muton is the same as Chryssalid, having two models, one idle and one attacking. The idle pose is used for the final render. However, the Muton doesn't have a pre-posed weapon here.

Viper also has three static models dedicated to rendering. An attack model, an idle model (Simply called ViperPose) and Viperbits, which consists of the Viper's head with her tongue out and her eyes above her head. It may have been used for switching over the pre-posed Viper's head without having to re-pose the rigged model again with its tongue out. Like Muton, Viper doesn't have a weapon here.

Technically used in-game, Den Mother's model can be found in the game files under the name DenMother.UPK or CIN_DenMother_SF.UPK. Although she does appear in a pre-rendered cutscene, her model and textures are still present within the game despite not actually being used during gameplay.

The .UPK file for the Magnetic Pistol contains a model and textures for a SM_AdvPistol (which can also be found in AdvPistol_SF.UPK). implying that ADVENT Forces could use pistols. Interestingly, a render for the ADVENT Officer on Feral Interactive's website shows it holding said pistol! 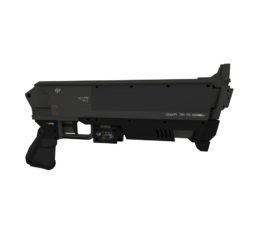 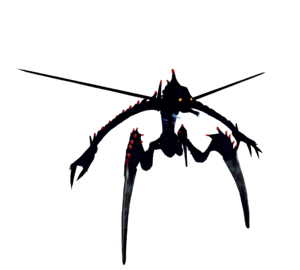 There's an unused enemy in the files called the ACV. It's a large tank with a turret on top that was likely supposed to be used for "retaliation" missions. The model has stationary and destroyed versions and even bones! However, the rigging seems to be incomplete. The ACV has animations. Mostly of it moving around and shooting. However, it has animations for it entering and it exiting, suggesting that the ACV could have been used as a land version of the ADVENT Dropships.

The Speaker (sort of)

The Speaker has a model under the name of CHR_Speaker_REF. While the clothes somewhat resemble the Speaker's, its head and hair look nothing like the final Speaker model. It also lacks textures and eyes as well, not to mention its high polygon count.

The real Enemy Unknown is just how much sound is unused inside of the game.

The Commander (yes you, the mute) actually had lines earlier on in the game! He sounds quite a bit like Shen from EU. May have been removed to allow the player to fit their own role as the Commander than to have the game define who the Commander is.

Advent Troopers, Officers, Shieldbearers and Stunlancers have audio for encountering their upgraded versions. The audio is never used, perhaps due to how useless introducing the same enemy again is. Curiously, Shieldbearers have three audio files like the other enemies but in-game, Shieldbearers only have one upgraded form instead of two.

There's no new audio for the ADVENT MEC however.

Turrets also have additional audio for upgrades, with it suggesting that the upgraded turrets would shoot two times in a row.

Drones, Synthoids and ACVs all have audio files introducing them. Just a few sentences said by Shen.

Lines for Tygan talking about "Witches" can be found in-game. While "Psi Witch" is the working name for the Avatar enemy, this suggests that at some point, Witches would be a common enemy, complete with upgraded versions of themselves.

While the Codices and Avatars have their own respective intros, they also have audio for formal encounters instead of for when they appear after skulljacking.

Autopsy lines for Archon Kings, Viper Queens, and Berserker Queens can be found in older versions of the game's SDK. Archon Kings could pick up soldiers and drop them, Viper Queens can shoot fire instead of poison and Berserker Queens are described to be "armored" and emit pheromones which possibly boost surrounding aliens' stats. These aliens do later appear in Alien Hunters, although the Viper Queen has been replaced by an ice-breathing Viper King instead.

As of the release of Alien Hunters, these files are still listed, but no audio data seems to be present.

Certain sounds from Enemy Unknown are still in the game, perhaps for testing. It's mostly confined to soldier voices, but interestingly, MEC Trooper voices are leftover as well!

Music from EU is also leftover, possibly before an actual original score for XCOM 2 was made.

UILibrary_StrategyImages_SF.UPK is filled with all sorts of oddities removed from the game.

Many graphics from Enemy Unknown can be found within said file. Room previews, autopsies, research and interrogations are present, although any enemy that shares the name with an enemy from Enemy Unknown has their autopsy image replaced with the one used in XCOM 2.

ChooseFacility_OTS is a render of an unfinished room with headless soldier models using equipment at the back of the room. The name OTS refers to the Officer Training School in Enemy Unknown where squad upgrades could be purchased. The OTS may have served the same purpose here but was replaced by the Guerilla Tactics room. 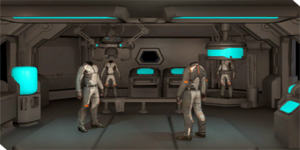 There are five inventory icons for unused ammunition in the game. The items are inaccessible, even when trying to add them into the game with the command console, implying that they're not coded into the game.

Falcon Rounds: Unknown purpose, though its sprite was used to represent Venom Rounds in the XCOM 2 Avenger preview.

There's less unused armour than ammunition, but most of the possible uses for them are used by different armour in-game.

Flame Sealant and Heat Absorption: Both very likely reduced fire damage, a role which is taken in-game by the Hazmat Vest. 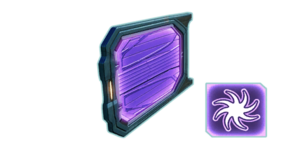 Under GOLDTECH (Story progressing research), there is a bizarre graphic called "Embryonic Advent". It resembles nothing aside from a strange, patterned marble, and the graphic itself doesn't even match any other GOLDTECH image. It may have been used for researching the origins of the ADVENT Troops but was scrapped somewhere along the line. 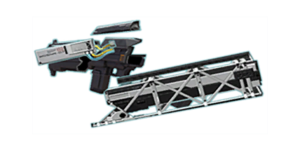 Elerium Dust and Twisted Slag can also be found. They may have been used as "destroyed" versions of Elerium Crystals and Alien Alloys, but it's currently unknown if this was their purpose.

ADVENT Heavy MECs have their own corpse sprite, suggesting that heavy MECs would be standalone from the regular MECs. 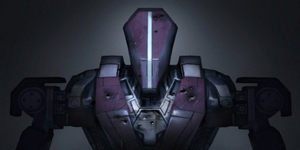 Chryssalids have an unused texture inside Chryssalid_SF.UPK. The texture is what a newborn Chryssalid would have looked like; presumably it would have been used for when Chrysallids are born from their cocoons but it's never seen in-game. A similar (though not identical) appearance was used in the Tactical Legacy Pack campaign "It Came From The Sea" under the similar name of Neonate Chryssalids. 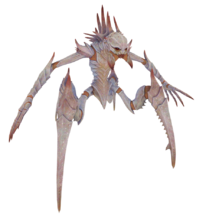 The normal Chyrsallid model with the Juvenile texture applied. 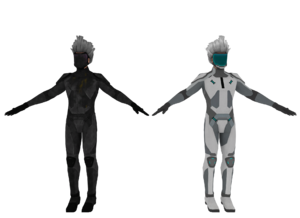 The damaged Avatar uses different normal and mask maps than the normal/commander one.

A texture remains in-game of the wound that could be seen on the ADVENT Officer during one of the cutscenes early on in the campaign. Its name obviously makes sense since it's a texture of an ADVENT Head with a massive gash at the back of their skull.

An unused material in the SDK has ADVENT Stunlancers with white colors instead of their dark denim blue colors seen in the final game. Likely would have been used for the scrapped third tier of Stunlancer mentioned above in the Enemy Intros section. 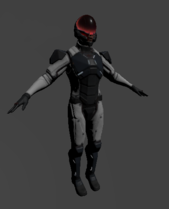 Sectopods also have a white material. Under the name "Forged", the white Sectopod could have been an upgraded form of the Sectopod or a special version used for the ADVENT Forge. Either thought is equally terrifying. Interestingly, the Forged Sectopod has its own MSK texture with more blue being in the areas where it's white on the model. 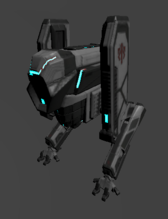 Strange, useless icons of enemies remain in-game. Enemies from Enemy Unknown are just in-game screenshots but enemies new to this game use their concept artwork. Strangely, there's an icon for a Drone that resembles nothing from any game. Perhaps it was to be the design for the Drone in XCOM 2?

There are a handful of cinematics inside of the "Movies" folder of the game that are unused.

1080_PropLoad_001.BK2: A loading screen depicting an eye watching over a city like the posters in-game. Unlike the other loading screen videos, this one actually has sound!

CIN_CouncilLoop.BK2: A video of the council spokesman from Enemy Unknown. Obvious leftover.

CIN_TP_BroadcastTruth_Engineering.BK2: A video of Shen using a computer saying "Closing to be within range, attempting access!". Shen doesn't have any facial movement in this video. It was probably supposed to be used for the ADVENT Network tower mission.

CIN_TP_WelcomeLab.BK2: An earlier version of the normal welcome video for the lab. It uses different shading and for some reason has numbers constantly ticking at the bottom left of the screen. Tygan's facial movements are nonexistent during this video, although his voice is present unlike the normal version.

The ADVENT Officer seemed to have had an "identity crisis" earlier on in development. The Officer is referred to in the game's file system as the "ADVENT Captain". Even the additional introductions and unused autopsy blurb refer to the Officer as the Captain!