This is a sub-page of Xenoblade Chronicles.

An early version of the Fallen Arm remains in the game's files. This map actually has its own name, that being Hidden Village at the Bottom of the Valley (谷底〜隠里). For the sake of simplicity, this article will refer to it with its internal name: ma1602. Strangely, the .dap and .lod files required to load the map only exist in the international versions while the map's name only exists in the Japanese version. The map itself appears to be unfinished, as it's possible to fall through the map in several places and some areas, such as the hill leading up to the Giant Mechon Debris, have abnormal collision. The Radiocarpea Coast and the area on Digit 2 where Zarkort, Bozatrox, and Theo can be found in the final are not present yet. Map objects, such as the Mechon corpses on Digit 5 Beach, have no collision. Much like the final Fallen Arm, rain can occur on this map. However, while the sky does darken and fog appears, no visible rain appears.

As is commonplace with the unused maps, no NPCs, enemies, or collectibles appear on the map. The Mechonis also is not present, while the Bionis is. Strangely, if this map is accessed after the events of Mechonis Core, the Bionis will not be present. Face Nemesis, Metal Face, and the Mechon corpses use their regular textures, and not the rusted ones they use on the final's Fallen Arm. However, Metal Face's and Face Nemesis' textures have subtle differences from the ones they use elsewhere. Several switch-activated mechanisms, such as the gate at the Rotating Bulkhead, and the climbing wall in the Power Pipe Ruins, continuously loop through their "open" animations, which makes climbing up the wall in the latter area virtually impossible.

It is internally placed between the final's Fallen Arm and Mechonis Field, this coupled with the fact its internal name goes up by 1 rather than 100, it is likely the Hidden Machina Village was intended to be a separate location from the Fallen Arm, and was likely merged with the Fallen Arm due to how small the village is compared to similar areas such as Frontier Village or Alcamoth.

Oddly enough, a screenshot of this map is used for the background of cutscenes taking place on the Fallen Arm in Project X Zone 2.

The texture for the water is less saturated in the final.

The lights in the Hidden Machina Village were redone.

The textures used by Metal Face on ma1602 are more vibrant, and better match his pilot's color scheme.

Face Nemesis' textures are also more vibrant. Some of the texturing on her main body was also altered.

A texture for a shop sign, evidenced by the kanji written in the center, 店, meaning shop. This is used in ma1602, but strangely enough it is on a sign outside one of the houses near the area where the Ether Light is in the final, implying the Machina Shop was originally further down the village than it is in the final. This texture does not exist within the texture bank for the final's Fallen Arm.

The faint glow on the crystals in the spring was removed in the final, likely because this effect also affects several rocks nearby. 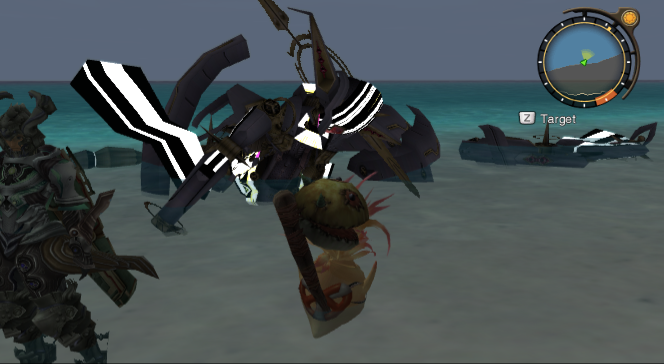 Face Nemesis' textures are glitchy, which is likely due to the map not having several of her textures in its texture bank.

The M104 at the Giant Mechon Debris site was changed to be upright.

The Ether Light was moved further down the village in the final. 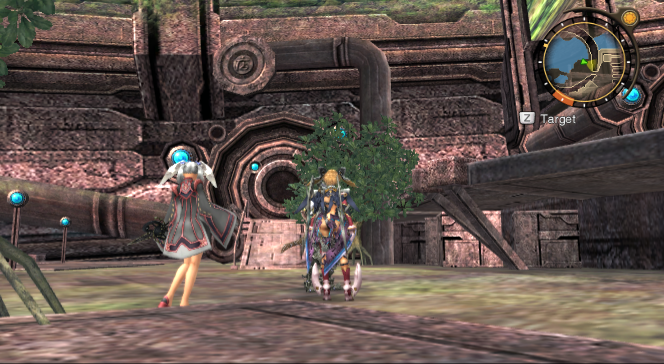 ma1602 is lacking the Mechon parts that rest on the boxes. There is a building in the Hidden Machina Village located near the Junks with a unique piece of geometry that it lacks in the final, which happens to be a sign using the aforementioned shop sign texture. This might have been the original location of the shop.

As well as the geometry around the dock being changed, the lights were remodelled, and the light emitted from them was brightened. Also note the different model and smaller lights on the house in the background. 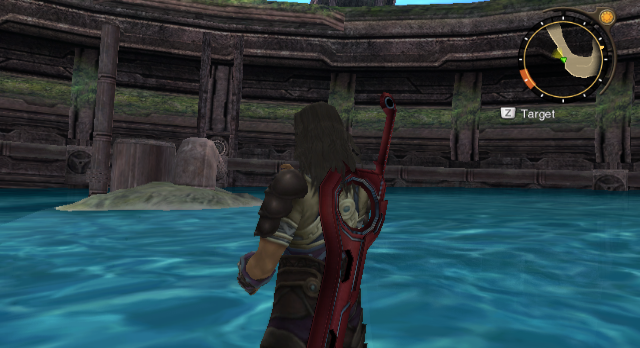 This island, which is connected to the pipe going around the Hidden Machina Village, doesn't exist within the final map.

The entrance to the Junks is always open, and the door to the area where Miqol is remains shut and has no collision. On another note, there is a glitch that is fixed for the final's Hidden Machina Village in which it is possible to get stuck inside at the windows at the front of the ship by swimming too close to them.

The Medical Bay is in a primitive state, lacking lighting effects and details such as the wires on the floor.

The geometry of Digit 5 Beach is vastly different between ma1602 and the final. The land mass was increased, a part of the beach was connected to the wall of the Hidden Machina Village. The small, hill-like area on the left was originally a small arena-like structure. The Mechon corpses used on the beach are the same ones scattered around Sword Valley in the prologue, rather than the unique rusted ones present in the final.

Metal Face is using his first model, rather than his upgraded model that he uses from Prison Island onwards. The spire from Galahad Fortress is notably missing. He is also mostly submerged into the ground, which is likely due to his positioning not being calibrated correctly. 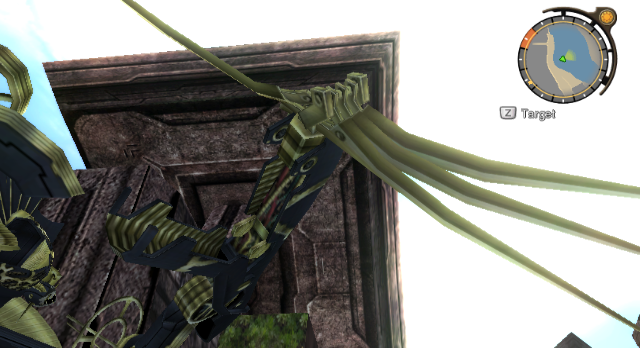 One of Metal Face's severed arms can also be found next to his corpse. The seam on the arm is open, exposing the wiring inside. In the final, while both of Metal Face's arms are cut off prior to his death, they cannot be found anywhere around the Fallen Arm. The camera must be manipulated by Dolphin's Free Look mode to see this.

The moss around the top of the walls was removed, more support was added near the bottom, and the texturing on the bridge was changed from resembling wood to resembling gravel. 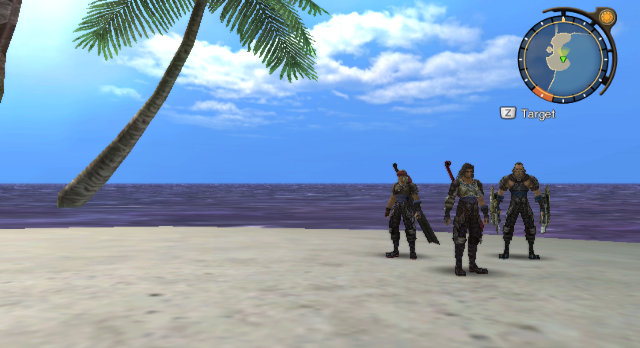 This circular area with a solitary floating palm tree was removed in the final.

The bridges leading to the Distant Fingertip have no fences, and are using a grass path texture, likely as a placeholder. The platform at the top of the fingertip, where the Tear of the Sky and Wicked Sallos are located, is not present in ma1602.