Yoshi's Woolly World is the first Yoshi game to be on a home console since the Nintendo 64. This game has a yarn art style, similar to Kirby's Epic Yarn. The gameplay is very similar to the Yoshi's Island games, but without any whiny babies to carry and chase after. Thank goodness!

The game received a port for the Nintendo 3DS, aptly titled Poochy & Yoshi's Woolly World, which added even more amiibo and the ability to create custom Yarn Yoshi skins, among other extras.

mapdata has 42 archives for test maps. This seems to be used to test out various things such as engine rendering.

In mapdata\epic_yarn_kirby, there are 78 stages which quite obviously belong to Kirby's Epic Yarn. However, these might be the files that contain the coordinates of certain map objects à la Super Mario 3D World, or XML-styled formatting.

A simple stage with a few objects placed around. The stage appears impossible to complete, due to missing objects being replaced with placeholders.

This stage appears to be a slightly different version of the stage that was shown in Nintendo Direct 23 January 2013. Objects are missing from the stage and are instead replaced with placeholders, most likely due to the object data being missing from the game. It's not possible to complete the stage, as you can't travel to the other side. The level may also lack a goal ring entirely.

One of the more detailed unused stages in the game. It appears that Yoshi would have been able to switch between the foreground and background at least once during this stage, but due to missing objects, it's impossible to do so, and as such not possible to complete the stage.

A small, very detailed area set on a quiet cabinet and a small table next to a window at night, with toys and other things atop these furnishings. There is an arch with plastic construction bricks at the start of the stage; at the top of this arch is an Invincibility Egg. Yoshi starts at the left of the stage, and can continue through the arch to travel on top of a ruler bridging the left and the right side, which has multiple objects on top of it. This area was most likely used for testing the game's art style, given its short size and general lack of anything. Alternatively, it might have been to test shaders, given the internal name; note that there is also a magnifying glass in the foreground that blurs Yoshi.

The soda bottles at the center of the stage read "Good Feel". Good-Feel is the name of the game development company for Yoshi's Woolly World. There are also two calendars with Japanese text on them in the background.

A simplistic remake of level 1-1 from Yoshi's Island. The level is missing a couple objects and an end goal. It's not possible to reach the end of the stage without the use of Mellow mode. Unlike other unused levels, this one has to be manually added to StageList.bson first.

An unused remake of level 1-1 from New Super Luigi U. This level only contains map data and doesn't appear to have a model assigned to it. Areas where certain objects like blocks and Star Coins could be found in the original level appear to have once had models assigned to them but are now replaced with the placeholder cube.

In the root of the game, there is a test folder full of objects, shaders, and some Miiverse stamps. Shaders and Miiverse stamps are split into two different folders called shader and body_memo_sample.

There are three test shaders within this directory.

This directory seems to have been used for testing out the Miiverse features, such as stamps. While the final game does have stamps, these are done in a very different style. The folder also has .tga and.gtx versions of the stamps, along with an SDK tool for converting .tga images to .gtx called tga2gtxTEstTool.bat (sic). There is also a very humorous drawing of a Swapnote envelope with a body saying "Hi". 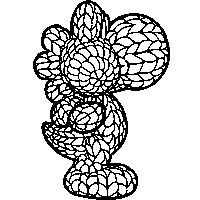 In chara\test, there is leftover data for a test character. It may have been used for animation testing of some sort according to the archive size of TESTANIM00.gfa being around 2.4mb in size. 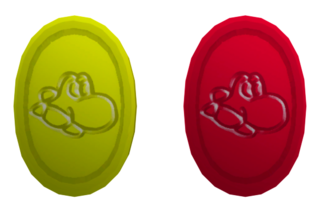 Located at /test/tr_coin_yellow and /test/tr_coin_red are models for the coins and the red coins like the ones found in Super Mario World 2: Yoshi's Island. Sequenced sounds exist for the objects in the bfsar.

There are no other SD_COIN_x sounds.

Contained in env/in_game/pause_old.gfa is an older version of the in-level pause menu. This older variant contains a few early versions of existing graphics used in-game.

Interestingly, according to Merino.msbt (the game's text archive), Stamp Patches were once called Mii Beads.

Used for testing, it does not use a texture for filter.

Used for testing, it uses LutTest.gtx.

There is a hefty batch of 25 unused light parameter scripts for various test levels. Ranging from environment mapping, stages with UV scrolling, and other render methods such as photorealism.

data_gfa_convert.bat in the game's root is a batch file probably used by Good-Feel to create a .gfa file, in this case, data.gfa.

sound/SoundDisableCallFrame.bson has text in it. The single kanji in this file (found on line 6) simply means "Wednesday".

Despite the fact that the American version was released four months after all other versions and unlike more recent Nintendo games at the time which had two completely different English translations, the American and European/Australian versions have only minor textual differences.

This change was necessary because "pants" refers to outerwear in American English and underwear in British English. Even though the American meaning is used in Australia, the British English version of the line is still used; however, "trousers" is technically still not incorrect.

A handful of Yoshi Design names differ between the American and British versions:

The scrapbook option has different names across localizations.

In addition to all the enemies except Kamek having separate names for the Japanese version, one entry was altered even in English.

In the British localization, the blue equivalent of Gargantua Blargg is referred to as Giant Nep-Enut as in Yoshi's New Island, closer to the Japanese names of these enemies, whereas the American version just calls it a Nep-Enut as in Super Mario World 2: Yoshi's Island.

The game's project name is Merino, according to the game's text archive. Merino is a breed of sheep that is commonly used for their wool.