Yoshi Topsy-Turvy attempts to combine platforming with tilt controls, all wrapped up in pre-rendered Yoshi's Story-esque graphics. Because of its short length and awkward physics, however, the game didn't do very well.

These pieces of text can be found in the ROM. It is currently unknown how to activate these functions, if they even still work. 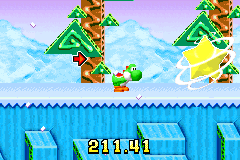 In the minigame "Yoshi's Big Jump", there is a goal at the far right side of the room. It cannot ever be seen through normal gameplay. When you touch it, the goal fanfare plays and the game fades into the score list for the minigame.

The Japanese version featured Yoshi who could be tilted along with the three apples. The international versions moved an apple to the bottom to make more space for the logo. The copyright info was updated.

Some effects during cinematics were toned down for epilepsy reasons.

The sec text was removed in the European version.

The US version made the text less blurred and thick here.

The width was reduced.