Yu-Gi-Oh! Worldwide Edition: Stairway to the Destined Duel is the first Yu-Gi-Oh! game released for the Game Boy Advance in Europe. It builds on the previous game by adding a world map, challenges, achievements, and multi-language support.

Certain characters have monsters that appear beside them outside of a Duel. (For instance, Dark Magician appears beside Yami Yugi and Blue-Eyes Ultimate Dragon appears beside Seto Kaiba.) Graphics for The Masked Beast and Mask of Restrict are stored when Umbra & Lumis appear. Presumably, they were meant to appear alongside the duo outside of a Duel. The two cards appeared alongside Umbra & Lumis in the Japanese version of The Eternal Duelist Soul. 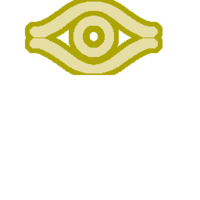 If no monster appears alongside a character outside of a Duel, Yugi's Dark Magician is used as a placeholder in the game's memory. However, Ishizu has an Eye of Wdjat instead. (Yami Marik, her brother's alter ego, has a distorted Eye of Wdjat in his background.)

The Sheep Token, which can be summoned with the card Scapegoat, normally can't be seen in the localized version of the game. However, it can be seen through a glitch.

These graphics appear in normal gameplay, but are obscured by the characters.

In Duel Monsters 6, a hexagram appears in the background when a monster materializes by a character or when a Rare Hunter is unveiled. The hexagram was removed in Worldwide Edition.

A distorted Eye of Wdjat appears behind Yami Marik in the Pyramid.

These are leftover strings from The Eternal Duelist Soul.

Tristan doesn't appear in the game. However, he was an opponent in The Eternal Duelist Soul.

These strings aren't used in the localized version, as they correspond to cards that only appear in the Japanese version.

This is an effect prompt for Ancient Lamp.

This is an effect prompt for Electromagnetic Bagworm, which allows the player to take control of a Machine-type monster.

These strings are for the three ticket cards (The Monarchy, Set Sail for the Kingdom, and Glory of the King's Hand) and the Egyptian god cards.

The Konami logo was scaled down and a trademark symbol was added.

The text has a different font and the "J" was recolored to black.

The prompt to erase data is located on a separate screen in Worldwide Edition.

In the European version, the message was changed and shadows were added to the text. However, the shadows are misplaced in the second line. The Japanese rerelease adds shadows to the text and blocks to the header.

The English option is represented by the U.S. flag in the North American version and the Union Jack in other versions.

Some of the terminology in the Options menu was changed. 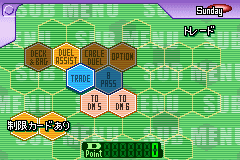 The card layout is different between versions.

(Source: Yugipedia for the furigana note)

Duel Monsters 6 has 1,111 cards (excluding Tokens). Worldwide Edition has 29 cards less, for a total of 1,082 cards. Cards listed in bold appeared in all versions of The Eternal Duelist Soul.

In Worldwide Edition, the player simply has to pay 1000 Life Points to activate Toon World. However, if the language is set to Japanese, Toon World's original effect is listed in its description.

(Source: Yugipedia for the unlock requirements)

Some of the booster packs have different contents in Worldwide Edition. Some cards were added or removed, while other cards had their rarities changed.