Located at 0x88007 is some copyright text crediting the sound driver to David Warhol.

(EDIT: 9/14/22) Looking further into the beta (Monsters) there seems to be removed/changed animations for the characters Zeke and Julie for when they lose a life.

Julie's death sprite can be seen here at 3:10. The reason why they're removed? who knows, but that's weird on why they even fully animated it then reanimated it... weird...

Several items and one weapon are unused, but unfortunately most of them have no function.

The banana is functionally identical to the popsicle weapon, and uses the same graphics. In the final version, only the HUD icon (left) still remains, but a sprite-based "pick-up" version (right) exists in the prototype. Picking up the "banana" only gives the player 1 ammo, having any other throwable items next in the slot will cause the banana to copy that projectile if the button was held, pressing the fire button quickly will result in throwing a popsicle instead.

This grey potion is functionally identical to the mystery potion already used in the game.

This odd machine can't be used at all, and has no apparent function other than taking up inventory space. The graphic does, however, resemble the in-game radar, and perhaps at one point in development the radar was only accessible by using this item in particular.

While this is technically used, it's never visible through normal play. This graphic is used for the flamethrower weapon pickup, which is hidden inside of a wall that conceals the player. The original purpose of this graphic may have been different, however, as it's also found in the prototype, which has no flamethrower.

A HUD icon for the paint can also exists in the prototype (above, right), but doesn't seem to correspond to any item you can add to your inventory.

This item has no function -- it cannot be used. 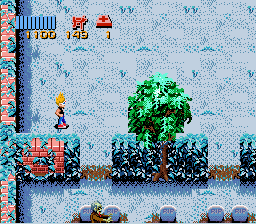 This snowy winter version of the standard neighborhood palette is never used. Change address F9271 from 8E to 91 to apply this palette to the first level, Zombie Panic.

This text appears in the ROM at address 14CC5:

While partially coded in, this bonus was never finished. It would grant 1000 points when a certain number of Blob monsters are destroyed. The Blob monsters can only be destroyed with cold weapons.

Zombies Ate My Neighbors contains one unused music track. Change ROM address F9292 from 06 to 0A to alter the music in Zombie Panic to this track.

This piece is used in the prototype "Monsters" ROM, where it plays in an early version of The Son of Dr. Tongue.

To hear these sound effects in-game, change ROM address 54C3 from 0D to the appropriate value.

A very strange sound, and the first sound by ID.

This sound is used in the prototype as the menu selection noise. It goes unused in the final version.

(This next sound is unknown for where it is in address, however it was found while dumping sound effects)

It seems to sound like an old lady, maybe used for the teacher neighbor.

The "ate my neighbors" part of the title screen was chopped off, resulting in a noticably stretched logo. According to the game's designer, Michael Ebert, this was due to the European publisher wanting a simpler name for the game.

The Chainsaw Maniac enemy was redesigned into an equally insane Canadian lumberjack in the European version. Surprisingly, it made the transition rather well, behaving identically in both versions. Some related sound effects and text (such as stage names and a bonus related to it) were modified accordingly. (e.g. the "Chainsaw Begone Bonus" became "Axeman Begone Bonus".) This was done to prevent comparisons with Leatherface from The Texas Chain Saw Massacre, which was banned in England, West Germany, and other European countries.

The Maniac's graphics on the Player Select and High Score screen were also updated to reflect their redesign.

The Game Over screen is colored differently between versions: in the American version, the overlay is a purple color, while the European version uses a green color. This may have been done simply to make the letters stand out, as purple is not a terribly offensive color.

The European High Score screen has a rather lazy orange border for some reason.