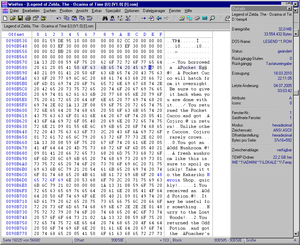 A hex editor is possibly the most multi-purpose and general tool used in ROM Hacking. It displays the ROM data as a hexadecimal string, which allows one to examine it, provided they have knowledge of the game's internals.

Most Hex editors support character tables (or thingy tables, as per the widely used hex editor thingy and later thingy32), which are small plaintext .tbl files that link every hexadecimal value with a character, which proves most useful when reading and changing text data. Some text editors allow relative searching for strings and automatic creation of tables.