This song is used in some of Super PoPo's Adventure's levels and on the title screen in Panda World.

This song is used in some of Super PoPo's Adventure and Panda World's levels.

A hexadecimal font, unused in all versions of the game. 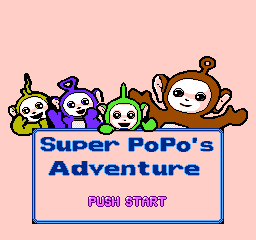 A Teletubbies logo, stored with the title screen graphics. It was likely removed to avoid legal trouble from the BBC.

Text reading "PUSH". This is stored next to the "START" text displayed on the title screen, and was likely intended to display alongside it. This can be seen in the mockup to the right.

an unused graphic of Po's mouth.

Bizarrely, Super PoPo's Adventure contains leftover graphics from Tengen's NES version of Tetris! These appear at the very end of the CHR data, at 038010 and 039010 respectively. This is likely a remnant of a pirate multicart, since the font from this game was often used for multicart menus.

Due to a programming oversight, one of the frames of Pikachu dancing on the ending screen never displays one of the tiles on his arm.

An unused duplicate of the word "OVER" from the game over screen. It is positioned differently and takes up 8x3 tiles instead of 8x2.

An unused duplicate of the bottom of the two graphics from the continue screen with a few erroneous pixels on the bottom.

A couple of unused platforms, stored with the graphics for the Tableland levels. If added into a level layout with a tile editor, they will behave as ordinary platforms. 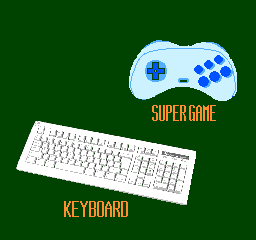 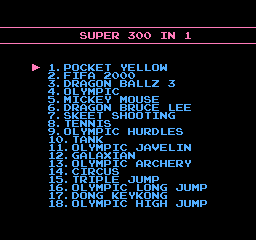 The Pocket Monster ROM contains complete and working code and graphics for the menu from the multicart where it was ripped from. It can be re-enabled with Game Genie codes PENNKYAK ENNNSYNN.

The menu is coded to work with a special multicart memory mapper, number 45 in iNES format. So, if you run this menu with the regular mapper 4, you'll see the wrong CHR data. To correct the mapper, use Game Genie codes AXSLXLAA ZXSLULZA GXSLKLGA as well. This still will not fix the font in the menu itself, which needs additional hacking.

The best way to see it fully working is to set the ROM's mapper to number 45 (both pictures above are taken from a ROM with mapper 45). 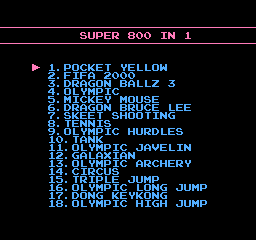 The menu is coded to support 2 different numbers of games: 300 in 1 and 800 in 1. It checks for some data in the ROM and then sets the corresponding game number. To switch to 800 in 1, freeze memory location $0024 to 01 when switching from the controller menu to the game menu.

Part of an automated program disassembly can be found near the end of PRG bank #8 in the Pocket Monster ROM, from 0x1FA10-0x20009.

A debug mode is automatically enabled in Pocket Monster when pausing the game. Select skips a level, and the D-Pad lets you move anywhere.

The debug mode is partially accessible in other versions. Pause and press Select, Up, Up, Down, Down, Left, Left, Right, Right, A, A, B, B (for Panda World) or Select, A, B, A, A, B, B, A, A, A, B, B, B (for Super PoPo's Adventure) to skip to the next level. It's unknown if the free movement mode can be triggered in Panda World.

The title screens are very different between each version. Both Pocket Monster and Super PoPo's Adventure use the same song, with Panda World using a different one.