From The Cutting Room Floor
(Redirected from Proto:Gremlins 2 (NES))
Jump to navigation Jump to search

This page details one or more prototype versions of Gremlins 2: The New Batch (NES).

The prototype of Gremlins 2 is from pretty early on, missing many features from the final including the intro cutscene and some music tracks.

Unlike the final which has a big 16×16 font, the prototype has a small 8×8 font that only uses the white palette. It is important to note that the final hardly uses the 8×8 font at all and is only really seen on the title screen and password screen.

Again, the font was changed. The prototype uses a cursor, rather than blinking the font. Further, the final has colored text.

The cutscene before Stage 2 and the ending cutscene are the only ones present at this point.

A green background was added into the final, as well as some other minor touchups like a different colored box that contains Gizmo to the couple's different colored shirts. The prototype's ending scrolls from top to bottom, unlike the final version. It's important to note that there are no credits in the prototype; at this screen, you are sent back to Stage 1 upon pressing Start.

The platform is a lot thicker in the prototype.

There's an additional pit right before the shop.

Sunsoft felt rather generous and added a bunch of spikes (much less so to the Japanese version) to the level (and CHR) to frustrate you.

Unlike in the final US and European version, Mohawk is able to hit Gizmo in his starting position.

There's an additional spiky ball and a stationary platform in the first pit section of the stage.

The area around the shop has a different layout of spikes and lava.

The layout of the entire stage is vastly different.

Several parts of the stage are different.

More white shine was added to the corners of the black marble.

At this point, the music tracks have subtle instrumental and arrangement differences. The music used for the title screen, item shop, credits, and completing a stage is not present at this point in development.

On a side note, the music does not pause when you pause the game.

Unlike the final, this theme is used in the prototype for the ending cutscene. You can also hear the entire track, whereas the final game always cuts it off partway through.

The prototype version is approximately 37 seconds long, while the final is about 44 seconds.

The DPCM bass samples were cleaned up in the final version. The bass is different at certain points of the song. 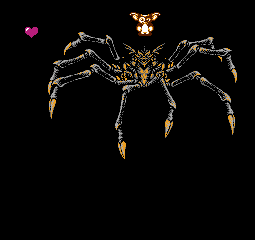 There is no invisible wall behind the final boss, so you can just go behind him and fire away without getting hit...which makes the fight fairly easy.