From The Cutting Room Floor
< Proto:Shadow of the Colossus
Jump to navigation Jump to search

This is a sub-page of Proto:Shadow of the Colossus.

The OPM demo of Shadow of the Colossus was released with Issue 97 of the Official PlayStation Magazine in October 2005. The disc contained demos for a number of games, including this one. 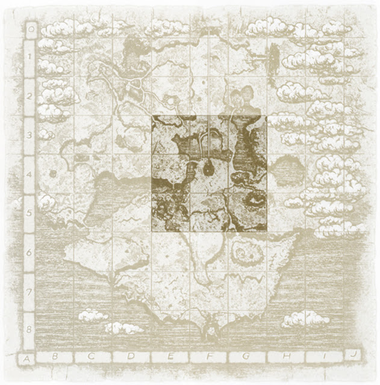 This demo allows players to fight Colossus 1. After the Colossus is defeated, a trailer for the game plays, and the game restarts. (In addition, if the player is inactive for long periods of time, the game will restart automatically.) Because of this, only 9 map squares can be traversed, as depicted in the picture above. The game crashes with a black screen or restarts if the boundaries of this area are approached. Beyond, the surrounding lands are represented by low res textures. 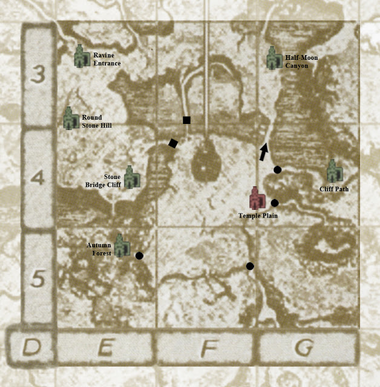 In the demo, it is not possible to save the game at Save Shrines. Most of the shrines are represented by low res models that melt away as you approach them. There are a few exceptions, however: the Shrines at E4 and E5 remain solid. 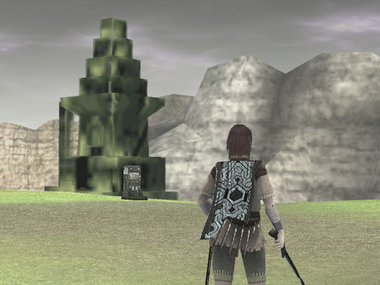 The Half Moon Canyon Save Shrine at G3 melts away like the others, but the Save Stone itself remains solid. 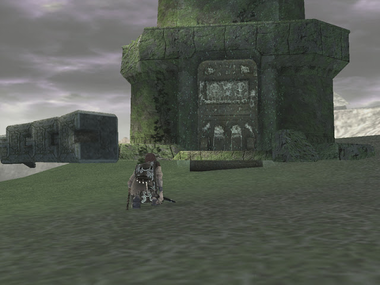 The Cliff Path save shrine at G4 is solid but can't be accessed as it's beyond a boulder. It is floating slightly off the ground. 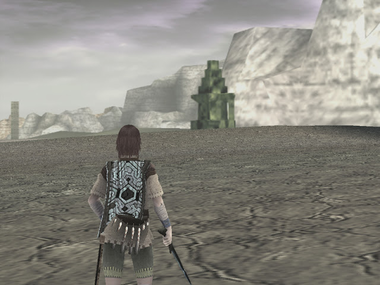 There's also an extra Save Shrine in the OPM demo which appears in no other version (marked in red on the map). It seems as though the developers were considering placing a Shrine here so players would be able to save near Colossus 4's area, but later decided to place a Save Stone at the Shrine of Worship instead. Though it is dubbed "Temple Plain" on this fan-edited map, whether it ever had a name is unknown. 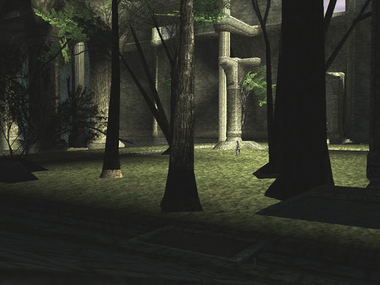 The garden is almost identical to the final version, but the waterfalls are missing and there is no forbidden fruit on the trees. The blocks at the back of the garden are stacked right up to a higher platform, but there's no way to grab onto them, making it inaccessible. 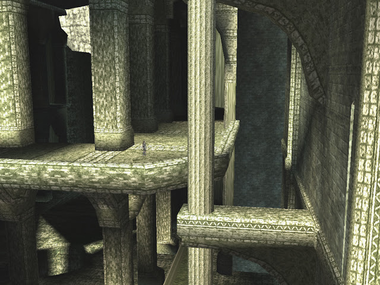 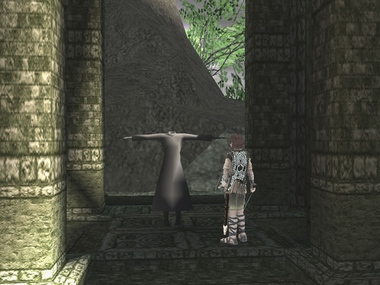 The most famous feature of the OPM demo is the headless model of Mono in the Secret Garden atop Dormin's Temple that the characters ascend to at the end of the game. The most likely explanation for its existence is that the developers were still working on the ending cutscene when the demo was created, and didn't expect anyone to be able to reach the area. 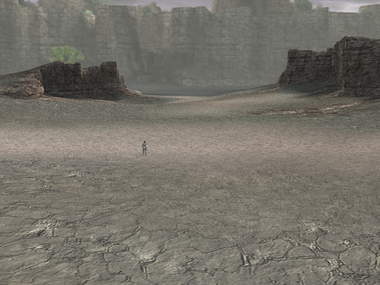 The landscape in the OPM demo is rather barren, devoid of the grass that was later added to the final version. 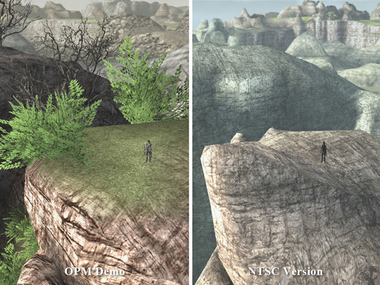 One exception to this is a cliff above the cave at E5, which has greenery in the OPM demo, but not the Preview Version or the final game. 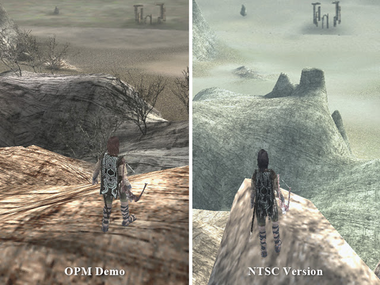 Another exception is some thorny bushes that grace another section of E5. They are present in the OPM demo, but not the final. 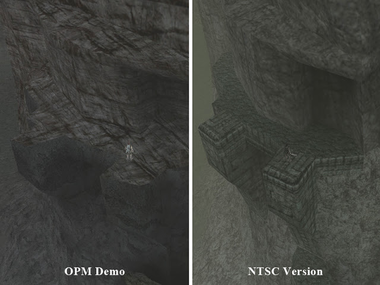 More detail was added to the textures in the final game. 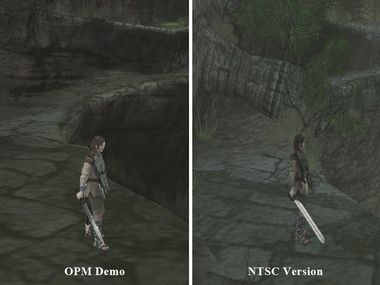 The fallen pillar that players must roll under to traverse the cliff path is missing in the OPM demo. 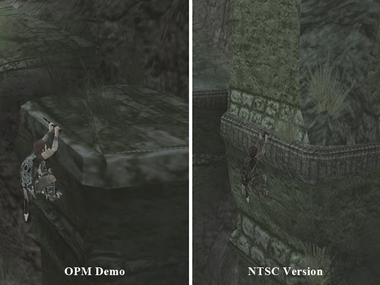 The ledge that players jump to is higher in the final version. 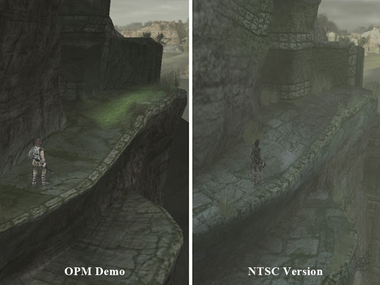 The lighting went through some changes as well. 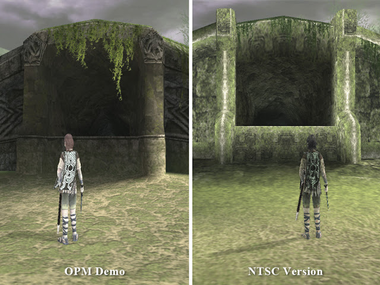 The design of the tunnel entrance differs between versions. 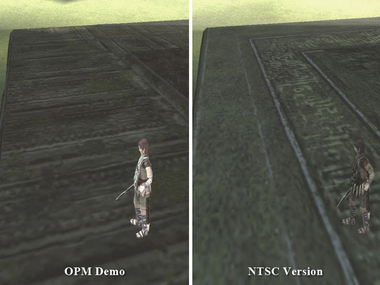 In addition, the final version of the texture surrounding the platform here is more detailed.

Finally, the sound of the waterfall is absent from the OPM demo. 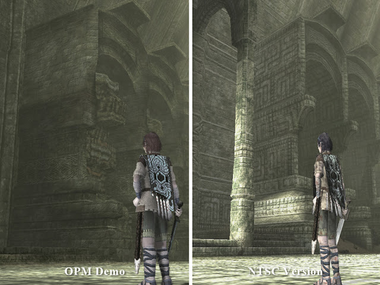 The OPM demo has a missing pillar. 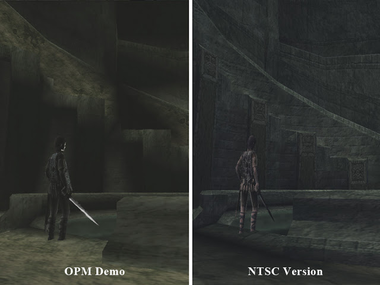 More detail was added to the textures around the stairs and pool in the final game. 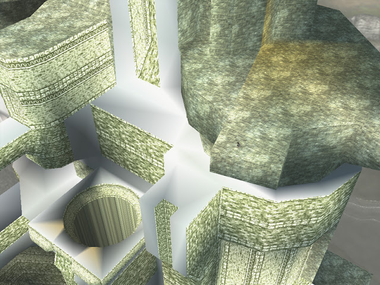 Part of the top of the temple was not yet textured by the time the OPM Demo was compiled.

The placement of the fruit trees was clearly not finalized when the OPM Demo was created. 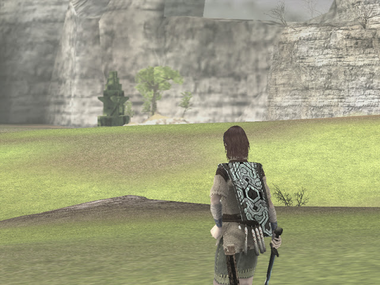 The Ravine Entrance save shrine located in E3 has a fruit tree next to it which is absent from other versions. 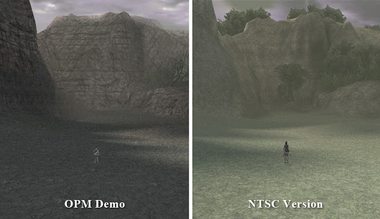 The fruit tree located at the north side of E5 is missing in the demo. 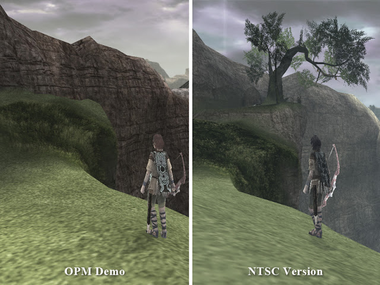 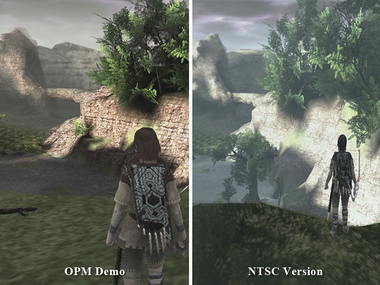 Both fruit trees at the south side of E5 are also missing. 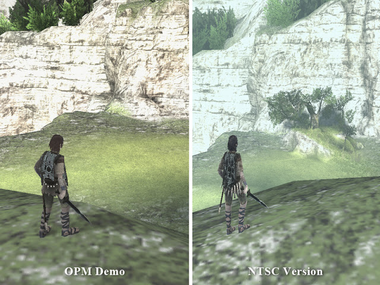 As are the fruit trees at G4. 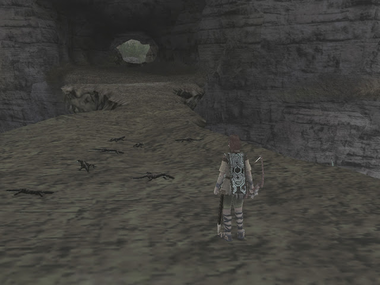 In the final game, killing white-tailed lizards increases Wander's grip meter by a single point, while eating fruit from the fruit trees increases his health by the same margin. Black-tailed lizards exist in the game, but killing them nets no reward for the player.

In the OPM Demo, players are awarded 5 health and 5 grip points for killing any type of lizard, regardless of color. The lizards also respawn, meaning that players can easily augment their meters simply by leaving and reentering the area. Not only that, but lizards in the demo move much more slowly.