450 in 1 Well 93 is another NES multicart with repeated games. There's thousands of carts like this one. 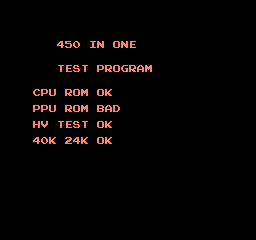 An internal selftest program can be accessed by pressing Select + Start on the main menu. It performs a test of the CHR data, PRG data, mirroring support and banking support. It is similar to the ROM/PCB test in 200 in 1: Elfland with only the game's name changed and a different palette used on this screen. They most likely share the same multicart engine.