8 Eye's [sic] is a game that can be best described as "blatant Castlevania ripoff". Put into the role of a brave falconer, you must recover the legendary jewels that are the 8 Eyes from the warring dukes, and restore them to the Altar of Peace. There's also something about nuclear war in there somewhere. 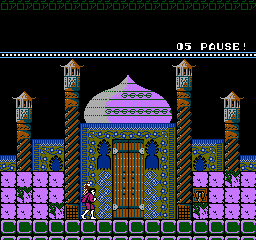 The Japanese version contains a sound test which was removed from the American version. Simply pause the game, and you can use controller 2 to scroll through the tracks with Left / Right and play a track with A. Most interestingly, the reason why we have this sound test available so easily is by an accidental "bug". The internal flag enabling this sound test somehow has the same RAM address as some system variable which is not zero at that particular moment of the pause. The cheat was actually meant to be triggered by pausing the game with the A + B buttons held on both controller 1 and 2.

Seta and Thinking Rabbit's logos were removed, along with PUSH START. Taxan's name was added along with some copyright dates, a TM, and "Licensed by Nintendo of America Inc." The topmost part of the E was cut off by the Taxan header.

The background was changed from black to teal, and the text is no longer ALL CAPS.

Same changes as above apply. The JPN version only has the characters A through P, while the USA version has the entire alphabet. This opens up some extra quests as we'll see below.

The USA version has two extra quests. "Special stage" and "Final stage". Special stage is automatically begun upon completion of the main game, and can also be accessed via the password TAXANTAXAN. Final stage is a hidden 3rd quest that begins by hitting Reset after completing the Special stage and viewing the credits, and can also be accessed via the password FINALSTAGE. These are mostly the same as the main game, only enemies now move faster and the clue scrolls are removed (the solution to the jewel puzzle remains unchanged).

8 Eyes has an unusual system wherein each time you defeat a boss, you receive a new sword that replaces your old one. The new sword isn't necessarily stronger against enemies but deals more damage against the boss who carries the jewel that matches its color. Ergo, collecting the Red Sword deals more damage against the boss that carries the Red Jewel (in this case, Egypt's boss). For some odd reason the order in which you receive the swords was changed, with the White Sword being acquired much later. Also note that the JPN order is the same one in which you re-fight the bosses in the House of Ruth (sans Germany).

The clues were given some extra space to account for the translation. The JPN version has question marks for scrolls not yet collected, whereas the USA version is simply left blank.

A few clues were changed between versions, although the solution is the same.

The hero is named Bond in JPN and Orin in the USA. The health/item extensions are displayed in color where they were simply left blank in JPN, they turn white once the extension is collected. "8 Eye's" was replaced with a scoring system that was not otherwise present. The "oss" in "Boss" was slightly edited and was moved closer to its health bar, and the bar's leftmost unit was redrawn to have an end-cap.

The JPN version has a nifty graphic for when you collect a scroll. Sadly, this was removed to allow more room for the English text.

PASSWORD and PUSH START are no longer capitalized, along with typical translation.

While the original game has only one ending, the USA version has three! Note that the third ending has a few typos, notably "motal" instead of "mortal" and improper capitalization.

Once again, the black background was changed to teal and the text is no longer ALL CAPS. Hiroto Nakamura's name was corrected.