Adventures of Tom Sawyer takes the well-known literary character by Mark Twain and sends him on an adventure in his dreams as he sleeps through school, kind of like most bored kids do while in school. All in all, an average side-scroller with a lot of rock-throwing. 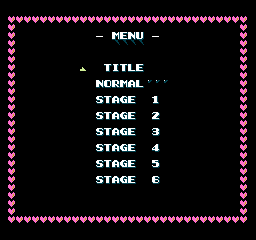 In the menu itself, you can pick which stage to begin at and toggle invincibility by pressing A at the option that is labeled as "Normal", which will change to "Power Up" accordingly. "Title" actually leads to the opening cutscene and not back to the title screen.

The stage order was rearranged for the US release. Bizarrely, the first stage of the US version was one of the last stages of the Japanese version.

On the score screen in the Japanese version, Huckleberry Finn (player 2) has his name misspelled as HACK. It was corrected to HUCK in the US version. This was most likely because the Japanese translation can translate to both (ハック Hakku).

Pamu - Takes fewer hits in the US version.