It's Metroid before Metroid. 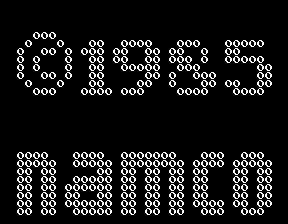 Dip Switch B8 (Listed as "unused" in the game's manual and in MAME) originally enabled player invincibility. The game still loads this dip switch's value at DEB3...

...but the BRA opcode needs to be a BEQ for the dip switch to work. Put the following code in aliensec.xml to restore this dip switch's functionality:

If you enter your name as one of the following on the high-score list, you'll get a multicolored rainbow flashing effect for 8.5 seconds:

Put the following codes in aliensec.xml to change the first background's graphics and palette:

A few character graphics are unused, including a skull (to count the number of Paccets killed?), some kind of vertical meter, and a tower or something.

There's an alternate version of the stage maps in the second background graphics ROM. The buildings are saucer-shaped instead of rectangular, and the boss graphic at the bottom more closely resembles what the game's bosses actually look like.

A few unused blocks for the tileset used in Stages 2, 5, and 7. The cracked graphics are close to the ones used in Stage 3 and 6, while the 16x16 blocks doesn't match the mechanical style of the rest of the tileset.

Big cracked blocks and spheres that don't match up with any of the used tilesets.