From The Cutting Room Floor
< Asphalt 8: Airborne
Jump to navigation Jump to search

This is a sub-page of Asphalt 8: Airborne. 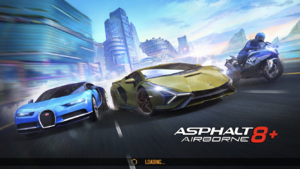 In August 2021, Gameloft dropped a version of Asphalt 8 onto the Apple Arcade subscription with some differences.

Like the original game, Porsche-tuners like RUF, 9FF, and Rinspeed were supposed to appear in the Arcade version. However, after v1.2.0, those brands were removed from the manufacture list even though Rinspeed was still credited.

A few vehicles from the original game remain in the Arcade version but are disabled (possibly for future updates):

Outro music for Trentemøller - Silver Surfer, Ghost Rider Go!!! and Bloc Party - Ares (Villains Remix) were used in the game until v1.2.0. Even though the outro songs don't play in the game anymore, their files still remain in the game.

The Mercedes-Benz SL 65 AMG Black Series has a Japanese-themed Rising Sun Flag decal in the game that you can purchase, unlike the normal game where you can't view it or purchase it at all.

Multiplayer mode was added to the game, and the following cars were added:

The Chevrolet Camaro GS is given away for free to players who installed the new update and had a profile from earlier.

New songs are added to the song list in order to make up for the songs that were removed from the game earlier due to licensing issues: