Baby's Day Out is an unreleased adaptation of the film of the same name, about a wealthy baby named Bink who gets kidnapped and subsequently has an adventure.

This game, on the other hand...you don't actually play as Bink, but rather try to guide him to safety in a similar fashion to Pac-Man 2: The New Adventures. 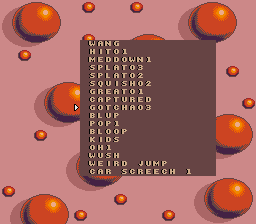 Enter the password XMSS. Interestingly, unlike most sound tests, this one only allows you to test the game's sound effects, not the music.