Bebe's Kids is a terrible beat 'em up based on the animated film of the same name.

The final boss' theme samples part of Malcolm X's "Message to the Grass Roots" speech, specifically the second half of the "Too black, too strong" quotation. The first half can be found in the game's data, however, and was most likely meant to play alongside the other sample.

At the Paramount Pictures screen, press Up, Down, X, R, A, Y, B, A, B, Y. Once the game starts, some debug codes can be accessed: 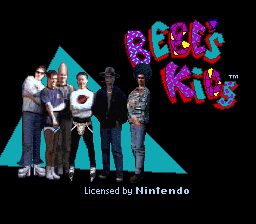 In addition, some graphics will be replaced with images of the development team, such as the title screen.