Big Red Racing is a rather quirky racing game where there's almost no constraints and has a rather jumpy camera (especially on any computer with a processor more powerful than a Pentium), yet there was clearly a good amount of work and love put into it with loads of details, cars, tracks, commentaries, and secrets. 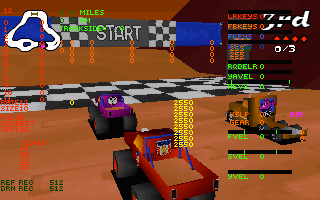 When booting up the game with the -DIAGS command line argument, it will not only show colored boxes over any selectable menu options, but it will also display debug information while the game is being played.

Here, the player can see brush tool tests, random polygonal objects scattered throughout, and can test launching off ramps of varying heights.

A very broken and unfinished track. Replace CITY1.lev with CITY3.lev, then replace occurrences of "CITY1.TXT" inside of CITY1.lev with "CITY3.TXT", to be able to see this track in the game. Then specify -LEV CITY1 in the command prompt to play it.