An isometric racing game based on the animated series of the same name. It's actually pretty good.

This article is brought to you in association with SNICKERS®. 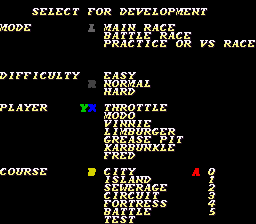 A developer menu to quickly test things is still left over in the US version. It can be accessed by setting RAM address $7EFE7E to a non-zero value (e.g. Pro Action Replay code 7EFE7EFE) and then picking either 1 Player or 2 Players on the title screen. Options are toggled by pressing the specified controller button next to the options.

While the European version still checks this RAM address and attempts to display the menu, the text and some supporting code were removed, which causes the game to crash instead.

For some reason, Konami went looking for a sponsor for the European release and actually found one in Mars Inc. As a result, the European version features an absurd amount of Snickers product placement, none of which was in the US version. 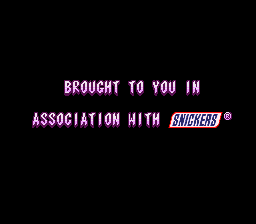 A second splash screen is shown, mentioning the sponsorship.

The character portraits were redrawn from scratch so the characters can show off Snickers bars. Some actually look nicer than the originals. Talk about dedication.

The mat shown in the character selection screen and round result screen had its star design replaced with a Snickers logo.

The Armor in the shop was replaced with "Food" which is, of course, Snickers bars. The functionality as armor and the pricing for each level are the same regardless. While each level of armor has a unique name and look in the US version, all levels use the same name and icon in the European version.

The manual actually has an explanation for the price: "In the future Snickers bars have become highly valued for their ability to ward off hunger which is why they are so valuable in the game." 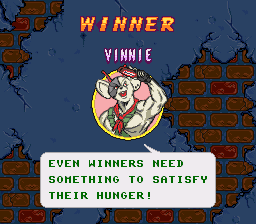 Before the race results are shown, the winner of the race is shown exclaiming their love for Snickers. All characters use the same message, and this happens after every race.

The totally not Mario Kart-inspired invincibility star item got replaced. Maybe justified for once.

Brand-new signs were added to the Sewerage courses (of all places).

Banners promoting the in-game shop "Last Chance" in the Circuit courses were replaced with ones for Snickers.

The light posts in Fortress courses were redrawn into Snickers posts.