Between demons with mighty powers is the lesser fiend Bill,
who shouts and eats for hours while his other friends kill

One day, like a rebel, Bill goes on a mission
through the nine circles of Hell to impress the competition

And maybe, past the torment, go to the next level
and make himself content with an autograph from the Devil.

DITL resources 130 and 131 contain text windows for a password system, which would have been used for loading the player's progress. This seems to have been scrapped in favor of savefiles, though it would return in the Adobe Flash port. 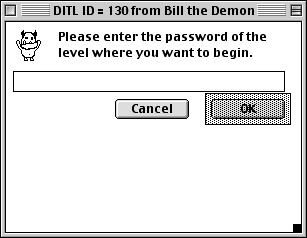 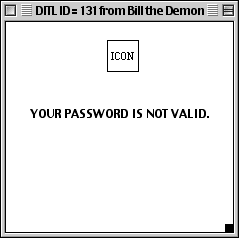 Each of the game's TEXT resources, which are used for level data, have labels which indicate who did what.