The 2009 Bionic Commando is a grim and gritty sequel to the original and was not well received by most gaming critics. While considered by many to be Capcom's biggest sales flop to date, it still made the main character popular enough to be featured in Marvel vs. Capcom 3. The developer, Grin, dissolved due in part to the poor sales and reformed as OVERKILL Software, spawning PAYDAY: The Heist.

The above file will unlock debugging functionality in the game. To use it, simply extract the contents of the file to the bundles folder in your game installation. This will add a "Debug" option in the Pause menu, which will have the following options available:

Present in data\movies\tutorial is bc_logo.bik. Judging by the file name it was probably meant to be a Bink video file of the game's logo, but instead, it is a placeholder video for the in-game tutorials.

This same file is also found in data\movies with the name trailer.bik, which suggests the game originally included a Bionic Commando Rearmed trailer, as mentioned in the deleted credits in the system_text.xml file stored in quick.bundle\data\strings\. The file contains a line that says:

The string id value is a reference to this Japanese Bionic Commando Rearmed commercial which resembled a TV show opening, and which had a theme song performed by Ichirou Mizuki. The video is also mentioned in the end credits.

bc_die01_win32 - A jingle meant to play when you died. In the final game, no music is used.

bc_upgrade_found01_win32 - Meant to play when you got an upgrade. The game uses an entirely different song.

wrong - One second of accordion madness.

test_music_01 to 05 - Spencer humming a test tune, in five separate files. A separate file that has all of these together is also in the game as an unused idling sound.

These lines appear to be outtakes.

Yeah, I do that all the time. *laugh*

I'll be in Munich in two weeks.

These taunts are in the game, and are read out quite casually, which contrasts with Spencer's usual screaming:

A conversation between Mike Patton and someone else, who insults his line delivery.

Spencer also has several unused sound clips of him humming music or uttering random voices. He's supposed to say them when he idles in place, but he only uses the cough, clear throat, and breathing sounds.

The game's tutorial is narrated by Joseph Gibson, but earlier, placeholder versions of many messages performed by a different voice actor are also in the game data.

There are three additional messages voiced by someone much younger, quite possibly someone from Grin's development staff.

The quick.bundle archive contains some uncompiled development code, as well as tools used during development: 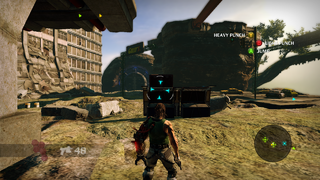 A batch file in the startups folder contains launch parameters for the game's testing sandbox. To access it, run the executable from the command line with the parameters -ewsext -zone sandbox -class Sandbox. (You can add that line to the Steam version of the game by right clicking its entry, choosing properties, then pasting that line in "Set launch options".)

This map is set in a floating island with various structures to swing from, rocks and cars to throw around, buildings to climb, a pond where you can drown, and a few collectibles. You can throw things off the island and they'll keep going until they hit the edge of the map. Of course, if you fall off the island, you'll die when you reach the bottom of the map, but you'll respawn on the island right away. 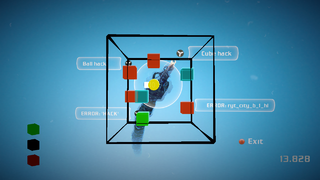 There's a hackable Relay in the map that has four options: Ball hack, which runs the script to deactivate the mines; ERROR: 'HACK' (which makes you leave the hacking screen), ERROR: ryt_city_b_1_hl, which loads an empty information screen, and Cube hack. Selecting that option makes the game load a fully functional version of the hacking minigame from Bionic Commando Rearmed! The game doesn't load a background so the graphics leave a blurry mess when you rotate the puzzle. Once you've cleared (or failed) the puzzle, you'll go back to the main Relay hack menu, but the graphics will be glitched so you'll have to exit the Relay to get them back to normal.

Other than Sandbox, there are a few working test levels remaining in the game's data. To load them, run the game with the parameters -ewsext -zone mapnamehere, where mapnamehere is one of the following values:

The credits.xml file contains some commented out credits:

The above is an earlier version of the DynaComware credits displayed by the game.

The console version of the game contained Pepsi ads on vending machines and billboards, but these were removed from the PC version and replaced with generic artwork. Curiously, the XML data files for their game models seem to betray their origin... by spawning cans of Coke.