Blazer is an isometric shooter where the player can control three different tanks, a helicopter, and a hovercraft. Destroy enemy vehicles to accomplish your nebulous goal! Don't forget your jacket!! 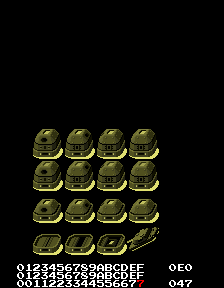 This is a simple object viewer with a customizable palette. 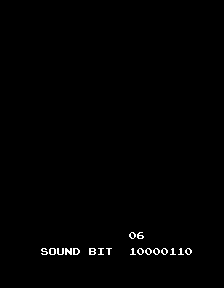 This is a more thorough sound test than the one in the service mode. 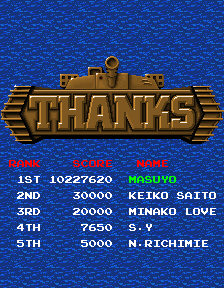 There's one special name that the game checks for on the high score screen. Enter "MASUYO" and then any other five characters (you can't just let time run out)... 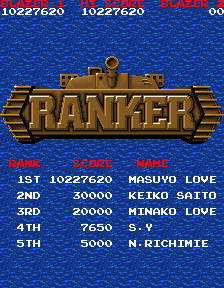 ...and the last four characters will be replaced by "LOVE".

There's a darker version of the tank icon in the tile graphics ROM...

A tiny little man! Is this the player character, or an enemy soldier? The world may never know.

An unused enemy. Seems like a normal van, but...

...there's a big ol' missile launcher in the back!

Speaking of launchers, here's one with a half-dome hatch.

Still more launchers! This one comes with a sliding hatch and a large red light on top and can shoot in four different directions.

Gouts of flame appear in the game, but they always come directly out of the walls. This version that actually shows the spout on the left is unused. And yes, both the flame by itself and the version that comes out of the spout are stored separately in the sprite graphics ROM.

A small warship that just never shows up in any of the game's stages.

A large aircraft carrier. The top-facing sprites only have one frame of animation; presumably the other frames of animation were overwritten during the game's development.