This isn't what you think it is...

Unused early boss graphics exist. The final version has no animation, and the body is curved differently. The animation may have been removed due to speed issues.

The Game Genie code GAUKNKGK enables an older demo replay system. It is not known which level this replay is intended for, or if it's just replaying garbage data.

A disabled level select routine is located at 0x1D096 and 0x1D0F9. The first adjusts level number variable from 1 to 21, and the second displays current level number on the screen. Unfortunately, there doesn't seem to be any code left to call this, and the variable is reset to the first level when pressing Start on the title screen. Using the Game Genie code XVOIIAAV and setting $7E7 variable to non-zero enables the first routine.

The string ERIKO is written in RAM to check if the game was soft or hard reset. 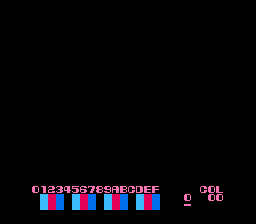 An unused tilemap amidst the other tilemap data, this appears to be remnants of a palette test screen. Only this tilemap is left in final version; the code has been removed. 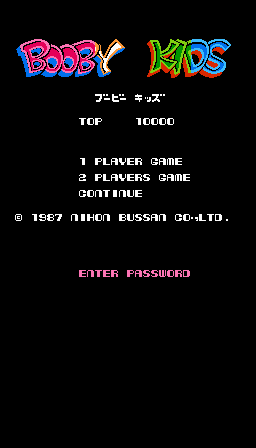 The older version of the title screen for this game was overwritten with the newer one in the final version. Nevertheless, some remnants of this old title screen tilemap can be found, which include the string "enter password". The string's display address is $288A, which is on the second tilemap page, so it would never have appeared on the screen anyway. This seems to be the only trace left of the password system.