Bounced was to be published by Midas Interactive in 2000 and got sent to Nintendo for approval, but ended up never seeing release... at least not until being discovered among the September 2020 lotcheck leaks. 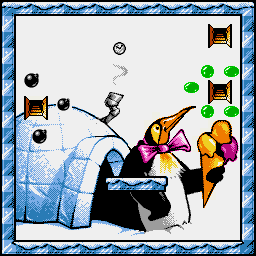 Due to a bug, the game freezes after finishing Level 31, rendering this level unused. This level can be accessed by using GameShark code 011F90CB.

The fact this game-stopping issue exists in the copy sent to Nintendo would explain why the game didn't get released...

A clear screen for the game's fourth world. Due to the aforementioned bug, this screen is never shown. Entering the password shown here takes you to the credits.

Takes you to the credits. This is the password given upon beating the game's final level... or at least it would be if not for the aforementioned bug.

Also takes you to the credits. Upon returning to the main menu, the ball in the logo will close its eyes.

Also takes you to the credits. Upon returning to the main menu, the ball in the logo will start blinking.