Brawl Brothers is the sequel to Rival Turf! ...in Japan, anyway. For whatever reason, Jaleco decided that Jack Flak and Oozie Nelson weren't cool enough to star in their own sequel in the US, and replaced them with a couple of identical clones named Hack and Slash. 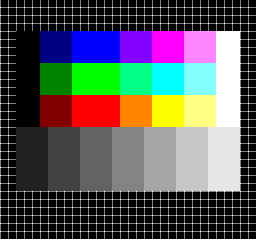 While the Jaleco logo is fading in or out, press any button, then press Down eight times. A color test screen will appear after the logo fades out. Press Start to exit the color test and proceed to the title screen.

An unused Vs. Mode win icon of final boss Dieter. He actually can be played in any mode by using the Pro Action Replay code 7E09200A, but this may suggest that he was only to be playable in Vs. Mode. Interestingly, if you use Dieter in Vs. Mode, this icon still isn't used, instead using Hack's icon.

In Japan, the game is titled Rushing Beat Run and it features the Jaleco logo. The font and copyright information are also different. Moreover, the Japanese version contains an "attract mode" if the title screen is shown for a long time.

Many Options names were changed, and some default values were altered.

In the International version, the options 1P VS CPU and TIME ATTACK were removed.

The background was changed to reflect the logo of the game. The skin colour of the character in red (Bild in Japan, Slash in the International version) was changed.

The international version removes the kanji "Run" and the title of the game from the map screen.

Many enemies had their names changed for the international release.

An animation was removed for the international release.

The US version, on top of having a completely different story, also removed the credits and the character introduction featured in the attract mode. While the story is only told through short dialogues before and after boss encounters, it was heavily changed for the USA version, such as having the last boss ask about "having time to get his nails done" after you defeat him. In addition, the Drain (Stage 3) and the Airshed (Stage 9), while linear in the Japanese version, were changed to mazes with multiple paths and dead ends before you could reach the exit. Also, the names of two of the main characters were changed from Rick Norton and Douglas Bild to Hack and Slash for the US version.