No relation to the Pokémon trainer. 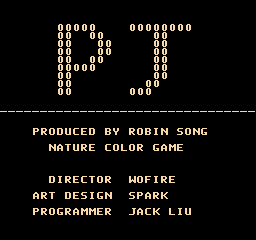 Blob Man is a complete reskin of Bug Catcher developed by Nice Code (see credits section below) and published by Waixing.

As expected, the title screen looks completely different. Waixing's copyright information has been added to the bottom, and shading was added to the game's font. Another version of Blob Man exists which lacks the Waixing copyright text.

The colors of the text were changed from yellow and light green to dark green.

Again, the in-game graphics have been completely replaced, with the setting changing from a forest at night to a sewer.

Possibly the result of a programming mistake, the pause text was moved to the left side of the screen in Blob Man.

The credits screen, still accessed by pressing Up, Down, Up, Left, Right, Left, B on the title screen, was given a new palette and the names of the art designer and programmer were changed. "JONY" and "JACKSON", credited as the art designer and programmer in Blob Man, are credited for the same roles in other Nice Code games, implying that Nice Code officially produced this hack/reskin for Waixing.