This glitch can be done in any place where a slope leads into water. Go into the water and face towards land, press Z and continuously press B and you'll clip through the ground.

As Donkey Kong, find a slope that's steep enough. Jump towards the slope, press B to punch, then continuously press B to kick. If done correctly, you'll gain lots of extra height from the kick attack. 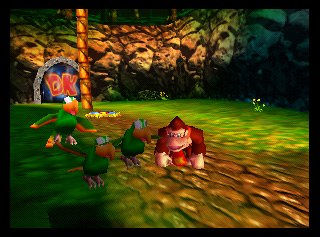 The parrots flying away at the start of Jungle Japes can be stopped in place by playing an instrument or shooting them with homing ammo immediately after entering the level. If done quickly enough, they can actually be knocked out like enemies-- the only way to do this in time is to die inside the level (or go out of bounds) and then mash Z and C-Up to play your instrument as soon as you respawn. You can also throw oranges at them, which will freeze them very low to the ground.

The reason for this has to do with Squawks' actor. It appears to be coded more like an enemy than an NPC, and thus it reacts to being hit by the player. For a brief moment after being loaded into the level, it is also capable of dealing and taking damage-- it hurts you on contact and can be killed, but only with the instrument. Dying/going out of bounds loads exit 00 (instead of the normal 0F), which has no DK portal cutscene and puts you closer to the parrots, giving you a chance to attack them before their "invincibility" sets in.

Using the infinite coins Mystery cheat may change certain Kongs' coin counts to 231 after it is turned off. This is due to an oversight: Unlike the other cheats, which simply freeze that item's counter, infinite coins actually modifies the coin count directly. Turning it on will change your current Kong's total to 999 (03E7 in hex) whenever you exit a Tag Barrel, which then becomes permanent if the game is saved. However, only the last 8 bits are actually retained, so after turning the cheat off, the count gets truncated to 00E7, or 231.

This bug only affects the files you load (and the Kongs you play within them) while the cheat is active.

If you stand directly up against a wall as Krusha and fire oranges into the wall, they'll get stuck out of bound for a few seconds before they all explode at the same time causing the framerate to drop temporarily or the game to crash. This doesn't happen with any other character.