To realize the ellipsoid shape of cars, two spheres are used:

However, the spheres do not fully touch each other, leaving a very small gap between them in which no collisions happen. Due to this, the following is possible, which may be experienced even accidentally when gliding sideways during normal gameplay (especially at the hard car control setting which removes almost no traction when turning sideways): 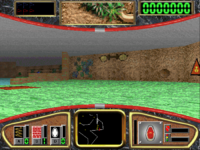 The problematic corner in level 3.

If you drive into a corner ending in a sharp interior angle at high speed, you may easily end up in one of the walls (typically the one you were closer to).

This is only really possible in the Sewer (3rd) level, in the small area locked behind 3 glue pads (often housing a blue and red flag). The small area behind the stairs to the left of it ends in a very sharp corner. Driving towards it from the mossy wall and turning towards it shortly before hitting the corner easily pushes you out of the maze, even through the mossy wall. It is also easy to kick opponent cars into the wall here.

This is probably happening due to failure in resolving multiple collisions happening in one frame, ignoring one of them.

Almost all ceilings which were deemed "unreachable" under normal gameplay are not solid and can be jumped or fallen through. This typically does not apply to ceilings of a raised platform you can drive on. You can reach them by placing a wall, jumping on it, placing another, and repeating the steps until you gain enough height. Note that you cannot jump on walls placed on a raised platform you can drive on, as you will simply fall through them.

Out of bounds oddities

These bugs are neglectible, as the original game claims to only support coordinates between 0 and 23000 on the X and Y axis, but may be experienced accidentally due to breaking out of the maze because of the buggy collision detection (s. above). The area outside these coordinates typically behaves glitchy, depending on where you escape it:

The graphics are also slightly messy: