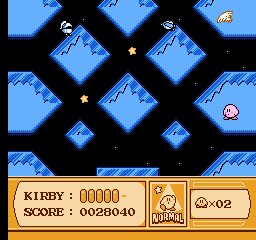 It is possible to pass through sloped floors in several areas of the game if you approach them at just the right angle. For example, in 7-3 (shown at left), jump towards the point where the upper and lower slopes meet, then quickly press Up to inhale air right before Kirby touches the point. If done correctly, Kirby will pass through the slopes.

(Note that doing this with the structures on either side of the screen will cause Kirby to get stuck, forcing you to reset the game if you haven't cleared the stage yet!) 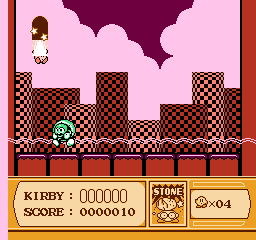 In the Rolling Turtle boss room of 6-1, due to a developer oversight, the block below the door can be destroyed and turned into a water tile by hitting it with certain abilities, such as Stone. If Kirby sinks to the bottom of this tile, he will begin to bounce up and down; transforming into Stone while in this state will cause the game to crash or exhibit other strange behavior, including audio glitches, loading stage data from other stages (including the debug rooms!), or playing the end credits. 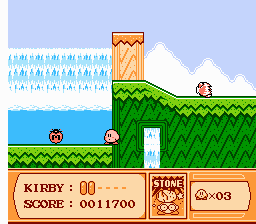 The same glitch can be performed to a minor extent in the third room in 1-1, done by making a frame-specific jump into certain slopes to make Kirby clip into the floor, then using Stone next to the water. 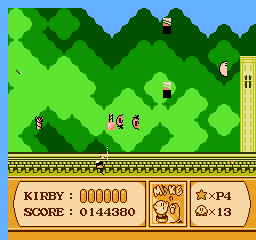 This one's fairly easy to trigger: when the Paint Roller boss has 3 HP left, wait for it to draw a microphone. Get the Mike ability, use it two times to reduce the boss to 1 HP, then stand in the center of the arena. Jump straight up, then use the last Mike near the peak of your jump to defeat the boss. This will cause Kirby to touch the Star Rod piece before the game can remove the Mike ability, leaving the counter at 00. The next time you press B, the counter will underflow to 255 (shown as "P5" in the status bar)! Using the Mike ability in this state will often cause the screen to flicker or spawn a bunch of garbage sprites, but the effect is only temporary.

This glitch can also be triggered in the Japanese version and US revision 0 by using your last Mike while touching the edge of a Star Switch's hitbox. This particular oversight was fixed in all later revisions.