Burrito Bison Revenge is the sequel to the popular Flash launcher game, Burrito Bison. Burrito had finally returned to the market, only to find that he somehow lost his wallet, coming to the logical conclusion that he must reap more destruction upon Candyland to find it.

There are several leftovers from the first game, including: 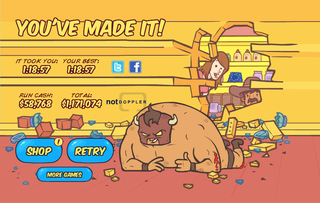