CHECK YOUR TRAINING WHEELS AT THE DOOR.

Leftovers from Capcom vs. SNK

It may not seem apparent from the start, since the first game doesn't use any real 3D in its backgrounds, Capcom vs. SNK 2 was built on its predecessor's engine. With this in mind, we can see leftovers from the first game in its sequel, like the fourth character slot.

You can have four characters on a team, but the game glitches out a bit trying to represent them in-game, since this was never meant to be done. You can set any number from the character list in memory address 2C241043 to have a fourth character.

The arcade version of the game contains a few incomplete and disabled features that would later be made available in the home console versions of the game.

As this video proves, the two console exclusive characters, Evil Ryu and Orochi Iori, are fully present in the arcade version, but there is no way to select them without hacking. It is possible that they were locked intentionally, though the reason why is unknown.

By setting memory address 2C225148 to 10, you can access the Training stage that is primarily used in the home console version. While it has no music at all, it acts like a normal stage with no glitches. 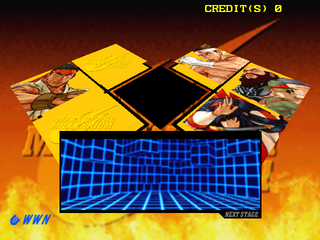 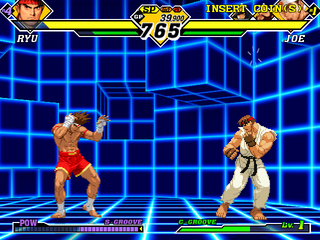 By setting memory address 2C241050 to 6 or 7, you can access EX1 or EX2 groove (the memory address is for player 1 only). It is currently unknown if you can set any of the EX grooves to act anyway like they do in the console versions. Since they aren't useable in the arcade version, they are most likely just placeholders. 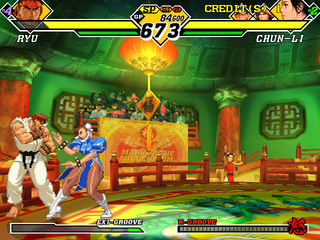 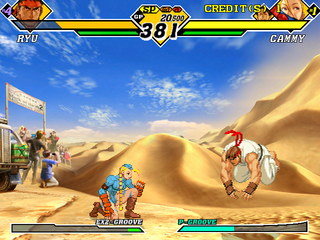 These current default EX grooves do not do much of anything but be able to use supers.

In the Japanese version, Rugal Bernstein uses his technique called "Genocide Cutter" and even says it out loud, but it was renamed to "Destroyer Cutter" and changed the dub to grunt sounds when he performs his move in the international versions.