Chaser is an FPS running on Cauldron's CloakNT engine. Follow John Chaser as he chases his way through a revenge plot.

Included in the game files are templates for weapon and AI scripts, as well as descriptions for commands.

Three of the property tags in the AI script files go unused:

This property tag is detailed in the template file for AI, but is left blank in the actual scripts.

This tag apparently does nothing, and is left blank in the AI scripts.

This tag is left exactly the same in the scripts.

Weapons can be added to the player's inventory by running the game with the -console command and pressing (`) in-game to open the console.

"Dummy_Gun" is evidently an early testing gun. Its model file is blank, but it uses hand anims for the AKSU 74, meaning that the player will position their hands for a gun that cannot be seen. It has no sound files and no icon, so it will not show up in inventory, although it can still be switched to. In terms of power, it has a fast firerate, moderate damage, and only minor vertical recoil, making it overpowered compared to other weapons. However, its aim is off, so it is somewhat difficult to use properly. It also has no secondary mode and cannot be switched to semi-auto. Its maximum capacity is 2000 rounds (1000 clip + 1000 reserve). 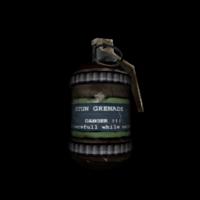 Unlike the multiplayer-only flash grenade, the stun grenade goes unused in all modes. It has a similar shape and function to the flash grenade, but only slightly obscures the screen while also deafening the target. It has no effect on single player bots, as it, like the flash grenade, can only do armor damage. 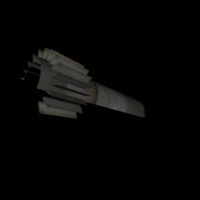 All of the guns used by turrets in the game can be obtained as functioning weapons. like dummy_gun, all turret guns are missing a picture, although some do have a mortar-like weapon model that lacks reload anims, and all have sounds.

The least functional of the guns, this one fires one electro round every three seconds, making it impractical against even the weakest enemies. It uses the mortar model and holds 1000+1000 bullets.

Fires a fairly accurate stream of bullets at a machinegun rate. It uses the mortar model and holds 1000+200 bullets.

Fires four bullets at a time from the view cam at a slightly slower rate but with around the same accuracy. It lacks a model and holds 1000+1000 bullets.

Fires one fast missile every three seconds. It lacks a model, but places the players view arm in the middle of the screen. It holds 1000+10 bullets.

Similar to the regular version.

Fires four rockets every three seconds. The rockets have a large hitbox and may collide with nearby walls, instantly blowing the player up. It lacks a model and holds 1000+10 bullets.

Mixed in with the vehicle texture files is a wireframe guide for wrecked cars: 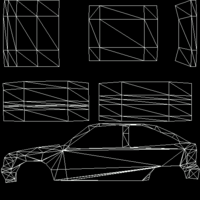 The actual textures include the remains of a photo of a car which looks like it was done over with a watermark tool: 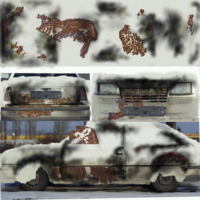 Several multiplayer character icons go unused, suggesting that at one point more skins were going to be available: