ChatChat is a game about being a cat; remade from a scrapped Ludum Dare project called KittyRpg.

There is much unused code in ChatChat leftover from its KittyRpg elements. 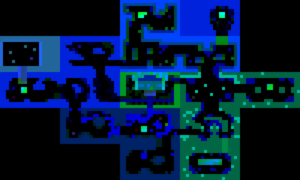 A map of ChatChat's areas, where each pixel is a representation of the three digit block IDs.

There is code in the game referencing locked doors. The door on the house doesn't have any text when walked into; this code is not used for that purpose.

The code also contains references to an Offline Mode, likely used for debugging the game.

There are many commands that go unused in the final version. These actions are actually partly referenced in the code, and some are even fully fleshed out. This is the ActionScript referencing implementations of the actions, extracted from the SWF. Here's a basic breakdown of what the commands would have done:

Testing of These Commands?

It is probable that these commands can be tested using a program like catcats. Catcats has already shown it is possible to control whether other players become cats or dogs.

The tilesheet has plenty of unused tiles. Most notable is the sewer/dungeon looking tiles in the bottom center. There aren't any unused area names, so this could have been a boss dungeon that got scrapped. Another interesting thing to note is the multitude of Help and Broadcast blocks. Looking at the map, you can see that where there are Broadcast and Help blocks they are all different colors. This lays clue to the fact that messages are controlled by the client and not the server.

This also holds true for the music blocks, but maybe at one time they were different for their note? 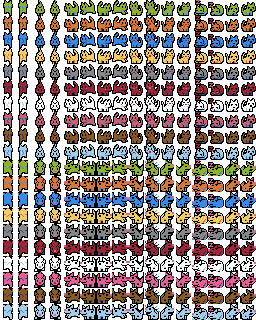 The sprite sheet mainly consists of animations for the different player characters. Players will take on a color in accordance to their player slot:

This is why there is a limit of 10 players on a server. Additionally, players can either be a cat or a dog. Horizontally, there are two animation frames for the following animations:

ChatChat has one unused music track.

According to an email Terry sent to Aly, the music is left over from one of his other games.

The SWF has a URL check built into Main.as and Preloader.as. With this check, the SWF when run on a path without "distractionware.com", "kongregate.com", "ungrounded.net", or "jayisgames.com" in it, will display an error message. This check can be removed with JPEXS by opening the SWF, navigating to Main.as, selecting the sitelock function, and changing the bytes 27 48 near the end to another 26 48 in the hex view on the right.