Despite the title and release date, this port of the arcade side-scrolling helicopter shooter is completely unrelated to G.I. Joe.

Both versions of the game contain an entire graphics bank dedicated to an unused alternate title screen, which reads "Stiffen Wolf". Judging from the Japanese DECO logo, this was likely the original Japanese title, which was probably changed due to sounding slightly suggestive and/or completely ridiculous. Unfortunately, there's no layout data for these tiles remaining in the ROM, but it's fairly easy to guess what it may have looked like: 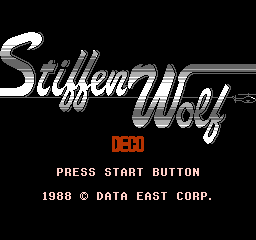 It should be noted that "Cobra-Command" was the game's arcade title, even in the Japan release region. It's possible an alternate name was chosen in case of legal trouble.

Not only did the game have an alternate title screen, it appears that there was a different ending planned as well. Neither of these two banks are used in the Japanese or US version.

What appears to be a large bullet hole is stored with the intro sprite graphics. If used, it would have taken up nearly all of the 64 available sprites. Perhaps the helicopter was originally supposed to shoot the screen?