Conquest of the Crystal Palace

Conquest of the Crystal Palace is a rather obscure NES gem that nobody mentions. This is one of the rare games with a mechanic that allows the sub-character to help you, much like Little Red Riding Hood, but a little better.

At the title screen, hold B + Select for a short time, release the buttons and after a while press A + Select a couple of times (not holding it), until a sound will confirm correct code entry. Normally, you can trigger this cheat by simply pressing A + Select once, but the program skips the code test every 8 frames, so you can just miss it, if pressed exactly at that time. Pressing A + Select a couple more times disables this cheat. When playing the game, hold Select and press one of the following button combinations to activate the corresponding cheat function. 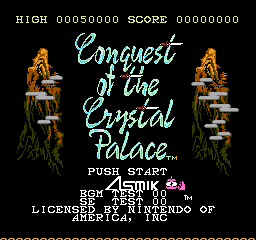 At the title screen, hold A + B + Select for the Sound Test to appear. Press Up / Down to switch between music and sound, but since there is no cursor, the only way to know which one is highlighted is to press Left / Right to change the numbers.

Conquest of the Crystal Palace actually retains quite a bit of Japanese kanji, adding to the overall far eastern flavor of the game. A few things were changed, however. Most of the characters were renamed; Tendou became Farron, Dodonpa became Zap, Rinka became Kim, the Moon Princess became the Crystal Princess and King Kaimei became King Zaras. Enemies also seem to take fewer hits to defeat.

In addition to the usual title change, the US versions adds a pair of mountains and the Asmik mascot as well as TM symbols. The Credit counter was removed, the High Score was pushed to the very top, and "Licensed by Nintendo of America, Inc" was added. The Japanese version has a different font, and much less text overall. There's also some cutesy headshots of the main cast.

It is interesting to note that the character 魔 "ma" is not used, but rather a truncated version containing the semantic radical 广 and the phonetic radical マ, with マ being pronounced "ma". This is unusual since 魔 does not have a simplified form, and the character is what are known as ryakuji. This also appears on the walls of Stage 5, although Stage 1 uses the full character in its name (魔天山). For comparison, this is like how English speakers might use "Thru" instead of "Through". Both are pronounced the same and have the same meaning, but the former is not considered a proper word. The subtitle まてんどうじ is simply MatenDouji ("Demon-Heaven Child" or "Magic Boy" etc.) written in hiragana.

Items dropped by enemies in the Japanese version are simple text-based powerups containing kanji. These were changed to more traditional graphic-based powerups overseas. This is about the only instance where the use of kanji was removed, as all stage names, shop items, and HUD elements retain their original appearance. These can still be found as leftovers in the US game, mostly in areas where items aren't usually dropped (like when fighting bosses). The palette for the last three items were swapped.

Kim's speech bubble was changed from こっち ("Over here" or "This way") to simply "Hi!". The bubble itself was also redrawn.

The shop menu's text was changed to simple English. Next (次) and Previous (前) were replaced with arrows, and a cross was placed between them.

As noted above, Rinka (鈴風) was changed to Kim.

This creepy-crawly from Stage 1 was changed into a bug-eyed slug monster.

This baby-like ghost from Stage 3 (see below) was changed into what could very well be a facehugger from Alien.

Stage 3, the "Realm of Hungry Ghosts" (餓鬼界) was given a complete overhaul, changing the baby heads into a writhing biomass. Note that the original version bears a striking resemblance to The Scream by Edvard Munch. Take your pick as to which version is creepier...

This floating platform from Stage 3 also had its faces removed.