This game has a lot of unused graphics, most of which are icons for upgrades and achievements.

All the game's images can be found here.

Let's play a game! It's called "spot the unused icons"!

The game keeps all the upgrade/achievement icons on a large sheet, from which it selects a 48x48 area to use as an icon.

This odd icon appears to be a placeholder graphic, based on how it was previously applied to an unused upgrade. It uses a similar red palette to the red "?" icon used for locked achievements.

Strangely, this icon was not altered during the Legacy Update, while almost every other icon received minor touch-ups.

This was previously used for the shadow achievement "God complex", before being replaced with its current icon.

Most kitten upgrades in the game have business/management-themed names, hence the unique attire.

The icon on the left is used for the unrelated "Hardcore" achievement, though it was present in the game long before that achievement was introduced.

These strange "cookies" appear to be for unimplemented "pseudo-cookies", based on their positions near the other heavenly upgrade icons. These may be intended for something similar to the heavenly pseudo-cookie upgrades "Heavenly cookies" and "Wrinkly cookies".

These icons have been removed from the sprite sheet at some point, either to be replaced or to be scrapped entirely. Because all these icons were scrapped on or before the legacy update, all of them have less detail than the icons that are still in use.

This orange cursor appears to have been for an unimplemented manual cursor upgrade/achievement, which would have used the orange palette seen on some of the dungeon icons. This could have been an upgrade to increase the power of the player's clicking, an achievement for baking a significant amount of cookies from manual clicking, both, or something else entirely.

This strange blueprint appears to have been related to dungeons, based on its former position near other dungeon-related icons. The absolute intended usage of this is unclear.

Interestingly, this icon had a slight palette alteration in version 1.032, which made it look less like a blueprint. It was removed in the 1.0463 update.

These weapons and hats appear to have been for various types of dungeon gear, positioned in an isolated section of the sprite sheet. There is a lot of unused code for dungeon hero equipment, which may have used these. It is currently unknown why these were stored in the icon sheet if they were, supposedly, meant to appear in the dungeons themselves.

Interestingly, the in-battle hero portraits depict the characters wielding swords. These swords most closely resemble the third icon from the left. On the other hand, none of the characters are ever depicted wearing hats.

These cookies were originally positioned in an isolated group in the right side of the sprite sheet, and shuffled around in various updates. The rightmost six of these were added in the 1.038 update. Based on the cookie with a medal pinned to it, these were most likely for achievements, though these really could be anything. These were removed in the 2.0 update.

This set of a whopping 50 icons were positioned in an isolated group at the bottom of the sheet. The various pastries with fillings were more than likely flavored cookies. These icons were added in the 1.038 update, with most of them blanked out as black silhouettes and being incrementally added to in subsequent updates until being fully filled in version 1.041. For whatever reason, the 1.0413 update reverted these to their pre-1.041 states, with the bottom two rows blanked out. All of these were removed in the 2.0 update and replaced with building upgrade/achievement icons.

These graphics are meant for purposes other than icons.

These frame tiles are older versions of the upgrade/achievement frames, which were given new designs in the Legacy Update. To replace the frames, the developer chose to change the original frames' file names, and added a new set of frames (containing both types) that took one of the old file names: upgradeFrame.png.

These frames appear to be unique versions of the frames for the Santa and Krumblor widgets. The game instead uses generic frames, which appear similar to the tooltip frames for upgrades and achievements.

This wooden panel background was previously used as a background for the buildings section, during the first Legacy beta update. Oddly, this graphic had its design changed at some point, before being left unused. 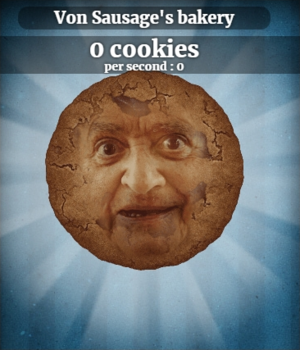 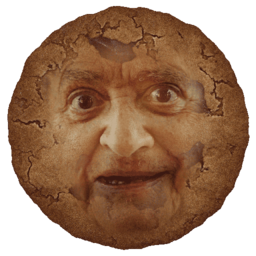 This... disturbing variation of the big "Perfect" cookie appears to be a leftover from a cut feature, left as an easter egg. This may have been intended as an effect of the Grandmapocalypse, based on unused CSS code for it.

If the unused code is executed, the graphic overlays the Perfect cookie and overlaps the panel borders. It will not react to the cursor, instead remaining static in its position. The Perfect cookie still exists behind it, and will function as normal. This code can be executed by entering Game.addClass('elderWrath'); in the browser's console.

These cursors appear to be alternative designs for the cursors seen on the Perfect cookie, based on their storage in the same image file as the other cursor graphics.

These cookies were previously used as falling cookie particles, which would appear and fall from the top of the left panel whenever the player baked a cookie. As of update 2.002, the particles that drop take the appearance of the player's purchased flavored cookies, leaving these graphics unused.

These separated Wrinkler parts are older versions of the Wrinkler particles. These particles would appear and spread out in random directions at the location of a popped Wrinkler. These were later replaced with particles that have differing positions, which causes the particles to align more with the body sections of a Wrinkler.

These egg graphics are based on some of the egg upgrades seen in-game. These graphics are, in order from left-to-right:

These marshmallows appear to be part of an unimplemented seasonal event. The file has a shorter height than the file for golden/wrath cookies, as well as other seasonal interactive elements.

This angelic "wisp" was previously used for the ascension screen. This image would be displayed above a text box that explained the ascension feature. The text box was reworked in the following update, and this graphic was left unused.

Retrieved from "https://tcrf.net/index.php?title=Cookie_Clicker/Unused_Graphics&oldid=1214813"
Categories:
Cleanup > To do
Subpages