Croc 2 sees the titular character on a quest to find his birth parents. 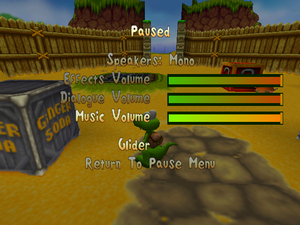 On the PC version, hold S and press Left, C, Up, Down, Space, C, Return at the title screen. A sound will confirm correct entry.

On the PlayStation version, hold R1 and press Left, Circle, Up, Down, Square, Circle, X at the title screen. A sound will confirm correct entry.

This will add a new entry to the "Sound Options" menu in the pause menu of the game. Scroll down to "Music Volume" and press A or S (PC) or L1 or R1 (PlayStation) to select a song. 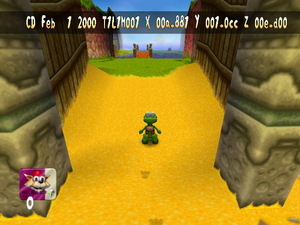 On the PC version, hold S and press Space, Down, C, Up at the title screen. A sound will confirm correct entry. Press F7 during the game to display the information, and press it again to remove it.

On the PlayStation version, hold R1 and press Square, Down, Circle, Up at the title screen. A sound will confirm correct entry. On a second controller, press X to display the information, and press it again to remove it.

Along with showing Croc's position, this also tells you the file name for the level you're currently on. On the PC version, it also supplies you with a build date. 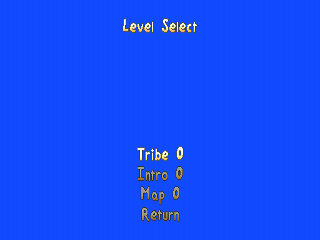 A level select exists in the game, but for the most part, it is non functioning. To access it on the NTSC PlayStation game, change the value at 009BBF8C to 14.

Pressing Select will change the Intro to Level, Boss or Secret. However, there is no way to leave the screen unless the value is changed back to 4 (for regular gameplay).

Although this Level Select does not work completely, it does track your level. For example, if loaded while in the Find the Key! Save the Gobbo! level, the stats will read as follows: 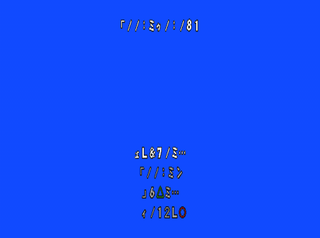 It can be loaded in the Japanese game, too. However, since it hasn't been translated, all text appears in gibberish, symbols and numbers.

A working level select menu can be accessed by setting the byte at 0x41AC66 (EU version: 0x41B186) to 0x12 and entering the credits cheat.

A cheat known simply as Magazine Cheat is mentioned in the game data, but it seems to be inaccessible. The disassembly of the Windows version reveals that there is no way to activate the magazine cheat without modifying the game's code. It can be made accessible e.g. by using a Cheat Engine script.[1]

On the PlayStation version (NTSC), the Magazine Cheat string can be found at 0x7DDE2C.

At 0x7DF131 is a note from David McEwen, a programmer for the game.

The levels used for the gameplay demos are older versions of the levels. A couple of these show early names.

Some of the levels intended for the attract mode / demo play are using earlier versions of the level, or go unused entirely. These levels all have missing areas, likely to reduce loading times. As such, entering doors will either cause Croc to fall to his doom, or result in an error message.

In addition to this, two copies of full levels are also present.

Find the Key! Save the Gobbo!

Another version of this level has been left in. It serves as the demo version of the level, and appears to be the same build as the one from the PlayStation Magazine Demo.

Upon completion you will be returned to the Sailor Village hub.

A near identical copy of the normal level, placed after it in the file list. Although 002 usually refers to a playable demo level, there are no known demos that include this level.

The only noticeable difference is that the scene played when you fail to reach the switch in time is different. In this longer version, the train is visible as it moves through a tunnel. The regular level shows the train disappear into pure darkness.

Completing this version of the level takes you back to Cossack Village as expected, but does not mark the quest as complete.

Bride of the Dungeon of Defright

Completely unused. However, it is possible to get into this level on the PlayStation version via a glitch.

The Gobbo has different text (with a grammar error that is sure to annoy many), the camera reacts strangely at certain points and Croc grabs the barrels strangely.

For those wondering, the text in the final is "Croc! Catch the bombs and blow up the cage!" and "Thank you!". Another Gobbo instead uses the corrected line, "You're my friend for life!".

In addition to this, there's some leftover text from an earlier version of the level hidden in the wad file.

Save the Ice Trapped Gobbos!

The Red Crystal on the upper platform is missing. The Green Crystal and two regular crystals are missing from the clockwork gobbo area.

The Gobbo's text has been changed:

In addition to this, an earlier script also rests in the remaining parts of the file:

The camera angle for the Gobbo is very slightly different.

Different laser placement. In the final, there are no lasers that Croc can walk under; he has to leap over all of them.

Interestingly, the clockwork Gobbo area has been kept in.

HEY! He Stole My Lunch!

There's a gong that was moved to the cave in the final level, and very minor changes to the text.

Burning Down the Forest

The lava reacts strangely in this level. In some parts, Croc can either swim in it (PC) or he'll leap across it (PS1) until he comes into contact with a certain part. A fire wall to the left of the starting point has no collision either.

It is possible to collect 50 Gobbos by hacking the game for infinite lives, since the game doesn't remove saved Gobbos when Croc restarts the level like he would in the final. The level still cannot be completed.

Find the Wheels in the Jungle!

There's a different jelly colour mark and the jelly is misplaced.

The platforms that are usually activated by breaking the box have been activated already, and the creatures that you normally hop across at this point have no collision.

The Dantini near the stonehenge structure is missing, as is one of the dinosaur enemies leading there.

Finally, the music is different.

Save the Ice Trapped Gobbos!

There's a second door near the Gobbo's door. It's obscured by the wall, and can only be seen by hacking Croc outside the level boundaries.

The door itself does not have a warp point, although most of the doors in this level lack one until they are activated by an event.

There are two doors hidden behind the level start. One of these doesn't work, but the other does (see below).

One of the two doors in Save 30 Gobbo Babies has a warp associated with it. When you go through it, you're teleported to a small grass plane nearby. Sometimes Croc will grab the edge, but it's impossible for him to let go of it. All that is on this plane is a single tree.

Interestingly, the game "locks" you there like it would if you were on part of the main map, so you can't get off it at all.

An icon seen in early screenshots can still be found in the game.

Some unused loading icons have been left in the games. Even on the PlayStation version of the game, these icons are never seen (though similar ones can be seen).

An additional trademark screen has been left in. The logo is of a lower quality than the one used, and omits OmniPlay.

There are a couple of attract mode videos / demos that go unused.

The first is a demo of "The Village Masher".

After skipping the text, Croc rapidly attacks, jumps, stomps and moves the camera around.

The second is "Find the Wheels in the Jungle!".

The demo recording is much older than the level file and appears to be broken, with Croc running straight into a wall.

Most level files store their sound effects in a proprietary format called "cvg" which is basically SPU ADPCM. The only exception is the unused Village Masher demo map (t0l1m002.wad). Its sound effects are stored as uncompressed PCM Wave files. Some of them contain interesting metadata:

Using the Position Bar cheat, it is possible to see build dates for the PC version.

For PlayStation versions, they can be found near the text for the cheat options.