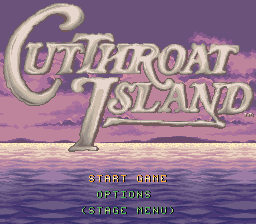 An option (STAGE MENU) on the title screen existed at one time, but isn't available in the final version. The stage menu begins at SNES address $878C9E. 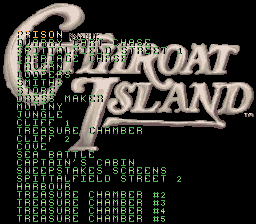 Use Game Genie code 3C6B-479E or Pro Action Replay code 878C9DEA to access it after the character select screen.

After selecting a stage, you will also be able to select the number of players, character, fighting style, and lives (3 or 999!)

This build date seems to be loaded, but not visible, on the stage select menu. The date for the PAL version is 11-27.

The stage select only goes up to Treasure Chamber #5.

The game has four unused songs.

A track that sounds similar to the Treasure Chamber theme. Was likely to serve the same purpose originally.

A short, tense track. Possibly meant to be used in the Quarry and Carriage Chase levels, but the final game just reuses the "Danger" theme.

A longer, danger-indicating track. Interestingly, this track is used in the Genesis version, for the final level, Sea Battle.

A track that uses more than 5 sound channels, similar to the Opening theme. Given the final game has no dedicated credits theme, opting to reuse the Cove theme instead, it was likely to be used there.