This is a sub-page of Development:Monsters, Inc. (PlayStation 2).

In art\Characters are Maya files for every character in the game, including many that didn't make the cut. 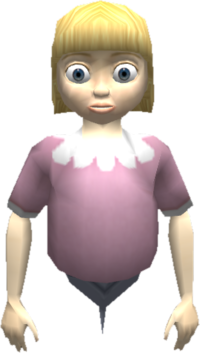 While a male design exists, this female one went unused. This design is reminiscent to a character seen in another Pixar film, Toy Story 2. 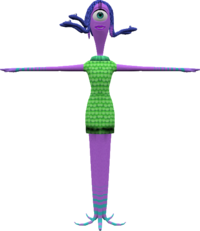 Celia Mae was meant to fully appear in the game, but only makes a vocal appearance over the intercom in the final game. One level she was likely meant to be in the "corridor" level (her model can be found in "Corridors_01.ma" in the assets), as well as the scrapped mini-game "scrnshr" (known as "Simon Says" and "Scrnshr" in the assets). 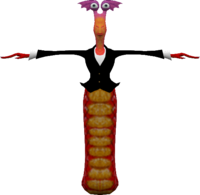 A model of Ms. Flint, a character seen in the movie. She would give the player instructions on how to play the game. She's fully modeled, textured and rigged, but has no animations.

An NPC named Frungus (known as "Fungus" in the movie - Frungus is a name he actually had during the movie's production). He was most likely going to appear in the Main Street level (some text in mainst.lv2, a file on the game's disc indicates a path is intended for him).

A generic male character. Judging by the contents of the file "sullyapt.lv2" on the game's disc, he was meant to be in the level "Sulley's Apartment" (known as sullyapt internally) instead of the character which was used ("figgis" - the game still uses male04's voice, but loads Figgis instead of male04). 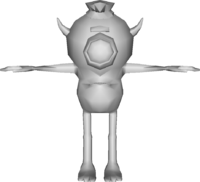 A mailman with no remaining texture data. 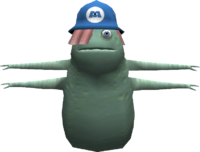 Smitty, a minor character from the film, was meant to appear in the Scare Floor level.

The following characters have folders, but no data inside.

A door shredder meant to appear on the Scare Floor.