DinoCity is a decent platformer that is loosely based on a mediocre made-for-TV movie. After "touching their dad's science device," two siblings are sucked into a giant TV and find themselves trapped inside their favorite show. To return home, they must retrieve a stolen fuse from a gang of tiny cavemen, with the help of two sharply-dressed dinosaur pals.

The game contains a number of button codes that can be entered at the title screen. For each button combination (ex. X + UP), while holding the first button, press the second button, then release both. A chime will indicate correct code entry. 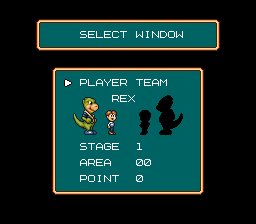 During the game, press Start to pause then hold R + A and press Select. The Select Window will appear, which allows you to choose your player team, and warp to any area in the game.

When finished, press Start again to warp to the selected stage/area, with your selected player team.

At some point of the development the game were designed to have difficulty selection. The final version still have several RAM variables to control the corresponding settings as well as whole set the corresponding data and code to handle them. There are two difficulty modes were available: "NORMAL" and "HARD" (see the "Hidden text" section below). The current player's value of the difficulty is stored at $7E1733 in RAM. The $7E2007 and $7E2021 RAM addresses contains difficulty setting for both players separately. The most interesting thing that default value in the released version for difficulty setting is "HARD", so you always play a hardest version of the game. To change the difficulty to "NORMAL", either patch the ROM at $22BCD and $22C08 to all $00, or set to $00 the RAM variables mentioned above in the emulator.

Need to mention, the default value of HP in "NORMAL" mode is 5 (with "Double HP" cheat this will be 10). Also there are some other differences including the more enemies on some stages, etc. A lot of them.

The ROM header at 0x007FF0 contains some dev name:

Leftover text from an old version of the level select, starting at ROM address 0x1B7A1. Note the early misspelled names for Rex and Tops.

Also, at 0x010D68 there is a leftover text from the completely disabled difficult select menu.

This very plain ASCII font is copied to VRAM at reset, but quickly overwritten with the Irem logo graphics. It is stored in 1bpp format in the ROM.

It also has an associated palette, consisting of some very basic colors.

This font was likely used for debugging at some point, but there doesn't seem to be any code left that would utilize it.

The Japanese release included a difficulty select between Normal and Hard. Hard is the standard difficulty, while Normal contains two extra hit points and unlimited continues. There are also some sprite differences between releases.

Cindy, the cavewoman, has more revealing clothing, a fuller build, and a more sinister expression in the Japanese version.