Hold A + B on Controller 1 and press Reset, then continue holding A + B on the title screen for the next 30 seconds. A sound will notify you that the cheat is enabled and you can release the buttons. Before the demo sequence starts, hold one of the following buttons on Controller 2 and then press Start on Controller 1 to go to the selected level. 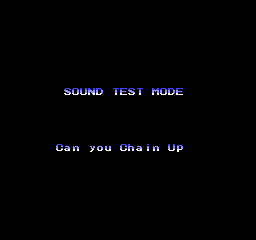 At the title screen, when "PUSH START" appears, hold A + B and press Start.

Unlike most other sound tests of the era, this one refers to each track by its proper name. Press Up / Down to select a track, and A / B to start or stop playback respectively. 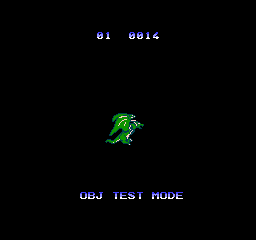 On the early development stage, there was another cheat handling routine. The level select enabling cheat was actually the global cheat enable trigger. In addition to the level select you were able to select "OBJ TEST MODE" by pressing B + Select + Start on Controller 1, and "SOUND TEST MODE" by pressing A + Select + Start on the same controller. In the final release, "OBJ TEST MODE" was disabled and "SOUND TEST MODE" was moved to a simpler cheat combination.

The old cheat routine can be re-enabled in the Japanese version since the code is still there, but it was completely removed from the US version. 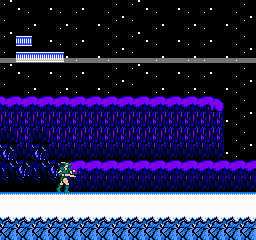 Game Genie code XTKGETAV re-enables a few in-game debugging functions in both versions of the game. To activate them, you must first enter the stage select code, then choose any stage. The first thing you'll notice is a grey bar flickering across the screen, which represents the amount of CPU time spent processing game logic outside Vblank (the lower the bar, the more processing was done that frame). Your Dragon Energy will be maxed out, and will not decrease when in dragon form. You can also press Select to cycle through Dragon Orb powers (green, red, or blue) at any time.

A stage skip feature was supposed to be available by pressing A on Controller 2, but it appears that some pointers got moved during development and it no longer functions (the game will freeze).