A girl and her ragdoll rabbit try to escape from an insane asylum in this 2D point-and-click adventure from Germany.

The other corpse in the church has unused text and audio. By abusing a game bug, they can be accessed as the corpse can be freely interacted with. There aren't a lot of options though.

Supposedly used when combined with the Pen, which is also listed as a wrong combination, oddly enough.

Interacting with the corpse without an object.

Interacting with the corpse with an object. 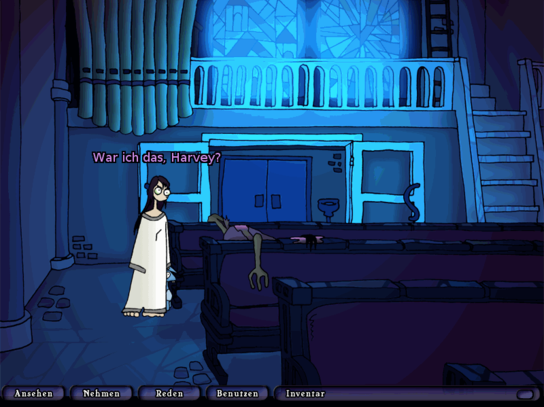 Two developer objects can be reactivated and used in Edna's cell. To reactivate the objects, go into the folder "EbaData" ("De" or "En" for non-retail versions) and open "raumobjekt.csv. Then set "Stargate" and "GetAllItems" to "true" and start a new save.

A Stargate that acts as a map exit and brings Edna into the "living room" of the patients. 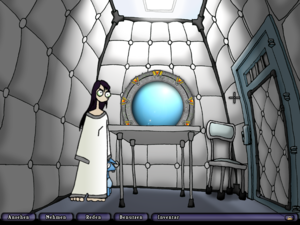 "GetAllItems" is located in the top right corner of Edna's cell and its graphic is offscreen, but it can be interacted with and gives Edna every item in the game.

The graphics are saved as PNG files, which means that, by browsing the game folder, you can see all that appears in the game — and more, if you have the original German version. Creator Jan-Müller Michaelis (aka Poki) reveals some information about the following screens in the audio commentary of the special edition.

Unused and not found in any subsequent release, this menu background with an early logo can be found. The text reads "A game from Poki."

An early version of the intro that was replaced by the final intro. In this screen, Edna, her father, Dr. Marcel, and his son Alfred were sitting at the table while Harvey was joking around, making Edna look "maladjusted" and upsetting her father and Dr. Marcel. The scene would have ended with Edna being forced to swallow - or force-fed - some pills.

Found in the files of the original German release are the backgrounds and objects of a scrapped flashback before the end of the game, in which Edna would have already been introduced to asylum as a "difficult child". She would feel uneasy and wander around the place and later learn how to do the Moonwalk. As usual with the flashbacks, all places are slightly bizarre in coloring or form, which is how she remembers these places from the perspective of a child.

The entrance area. The most noticeable difference is that the guard is blond and has long hair.

The ground floor. Edna was supposed to wait here while her father was talking to Dr. Marcel.

A close-up of the whale painting. Edna was going to wait here, but as she felt uneasy, she stood up and would look around the place instead. It is also referenced by Edna when she looks at the abstract painting in the present time version, where she says that "It reminds me of a little girl in the stomach of a whale." 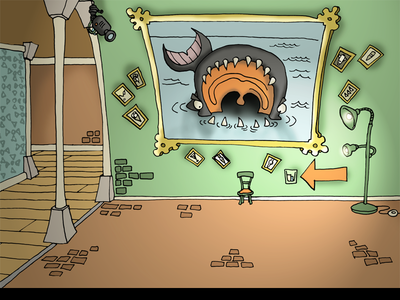 The back area of the ground floor. There are some color differences and the wallpaper is still fine. In the audio commentary, Jan-Müller talks about a story that he remembers about the "welcome" mat and how it points to the door, a way of saying "get out of here". Curiously, in the past it points towards the inside instead.

In this screen, Edna would have learned her next ability, the Moonwalk, from "Michael Jackson". As revealed in the audio commentary, he was responsible for the graffiti found downstairs.

A frightened Edna walks around the place, and this is the distorted version of the second floor in which she sees and remembers the patients as dark and scary beings.

A slightly different version of the third floor. The most noticeable difference is the fact that the staircase has been painted with the wrong colors and is therefore blocked, and that cables run from the electroshock treatment room through the grate.

The electroshock room. Objects can be found in the files, like a tool box and a broken window, that have no used counterpart and hint at a sequence taking place here.

The entrance from the other side. You never get to enter this room in the final game, so you’ll never know that the guard isn’t wearing pants and that a poster on the opposite wall greets new patients with the words, “TODAY IS THE FIRST DAY OF THE REST OF YOUR LIFE.” Well, now you do. Also, the guard once again has long, blond hair. 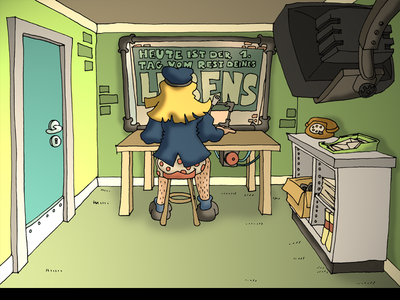 The laundry room. Two unique objects exist for this room, a coat hanger, and a coat hanger with a... coat. No equivalent exists for the present.